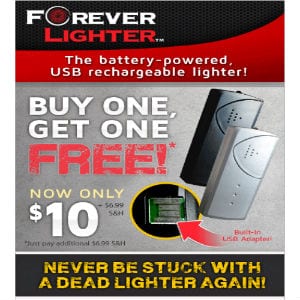 Forever Lighter markets itself as the first update to a standard lighter in several decades. This is interesting since an ordinary disposable lighter is sold everywhere and for the most part seems to be getting the job done. So let’s see what they think makes this better.

Overview
Ever since early man discovered fire we’ve been looking for a way to wield it in the palm of our hands. We pretty much nailed it with a lighter, and they work so well that the design and function has gone unchanged for such a long time. In just a flick you can have a flame, and it’s used by countless smokers, campers, and candle-lighters the world over. There are a few essential drawbacks to these lighters. First they are disposable, and they don’t always light the first time, even when there isn’t any wind around, but it definitely becomes harder the windier it gets.

The Claim
The makers of Forever Lighter say that it doesn’t use any lighter fluid or flints to make a flame, and that you simply recharge it in a USB slot in order to keep it working. They say it’s good for over 100 lights per charge and that it’s windproof like the cigarette lighters that cars used to have. They also say that it can end up saving you money over the long term.

The Hype
They do a good job of showing how this would work and it’s various features without going overboard on the claims or how you’d be able to use them. If you regularly use a lighter you can see the value in this almost immediately.

The Cost
You get two Forever Lighters for $24. So at a price of $12 each you’d have to buy 12 or fewer disposable lighters, and that’s if you can find them for around $1 sold at various locations. Of course you can also buy lighters in bulk, driving down their cost, but they’ll still be disposable and you’ll have to buy more at some point. You can opt for a Zippo or similar lighter but then you end up having to buy replacement flints and more lighter fluid.

The Commitment
This should be able to successfully replace your current disposable lighter, and can even replace a Zippo and the need to buy lighter fluid for it. If the thought of not having to buy a lighter appeals to you, this is going to be a successful purchase for you.

Evaluation
They’ve really thought of everything with this lighter by making it easy to charge on any computer, and by making it so it doesn’t actually produce a flame, but rather has heated coils similar to the car lighters that used to come standard in most cars. These days those lighters have been replaced and only serve as a way to charge up your smartphone or other electronic devices while driving. They’ve also used up as much of the lighter as they can, figuring out a way to sneak an LED light in it so that it doubles as a pocket light for times when you need one.

There are only a few ways that these could let you down. First, the coils could break or get damaged and stop getting hot enough to light your cigarette. Next, the pop out USB charger could stop coming out, or could break and stop charging the unit. But we haven’t seen any feedback that would suggest this is the case, and it seems like it’s built well enough to withstand repeated use. At some point of course it will break down, as it’s going to get hot again and again, and it’s got electronic circuitry in it that just can’t last forever.

The Forever Lighter is getting our Thumbs Up rating, as they’ve successfully figured out how to give you all of the features of a lighter with none of the drawbacks. Because you can recharge this and use it in the harshest winds, it’s clear that it’s a winner. A disposable light may only cost a buck from any gas station or convenience store, but that can add up over time. You just have to make sure not to misplace your new lighter because that could get expensive.

When comparing this to an ordinary lighter it’s pretty easy to see that this would be preferable, since it comes with a light in it as well, and you can use it again and again.

Our Recommendation
This is a handy product to have if you’re tired of going through lighter after lighter, or tired of trying to light a cigarette in the wind or even a light breeze. It might not last “forever” but it should provide repeated and reliable use until you either lose it or it finally breaks from wear and tear.

What do you think? Does the Forever Lighter work or not?

9 Customer Reviews on “Does the Forever Lighter Really Work?”