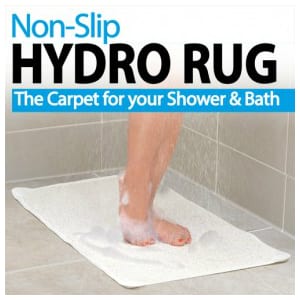 The Hydro Rug is a rug that you can put in your shower, getting the benefits of a carpeted area in your shower without worrying about it getting moldy and disgusting. Sounds good, but how well does it work when you put it to use?

Overview
Maybe before you saw this product you never really thought about putting a rug in your bathtub, but after you see it it makes a lot of sense. If you have carpeting everywhere else in your home, or rugs in strategic places, the shower might be the only place where your feet are pressed up against a cold and hard surface.

The Claim
The makers of the Hydro Rug say that it’s like putting carpeting into your shower, and that it won’t slip so you don’t have to worry about it becoming a hazard. They say it’s fast drying, and stays clean at all times, and they claim that it never wears out, so you can use it again and again and not have to worry about it getting worn and grimy over time. They say it provides comfort for your feet while you’re showering, in contrast to the typically hard shower floor.

The Appeal
This is the kind of product that most anyone would want, because it solves a problem many of us didn’t even know we have. If you currently have a bathmat in your bathtub and shower, chances are you’re not very happy with it. It is probably made of plastic and you’re using it because you don’t want to slip and fall in the shower. It might provide a little padding between your feet and the shower, and it has probably seen better days, picking up mildew or shower grime in its cracks and crevices. The Hydro Rug seems to address most of the problems with conventional bath mats.

The Cost
The Hydro Rug is $20 plus shipping which is $7 for the slowest method. Compared to other bathmats this is pretty highly priced, no matter how you look at it, but it’s not really an apples to apples comparison. When you compare it to the Aqua Rug you see that the price is right on point with competing products. Just be aware that the Aqua Rug has the buy one get one option, so you can get two for $36.

The Commitment
All that you should really need to do is replace your current bathmat with this one, if you have one. This is definitely a set and forget style product, and once it’s in place you can simply leave it alone and it should provide reliable service day after day.

Evaluation
They’ve made the material a bit like a loofah sponge, so your feet get a nice scrubbing too without having to bend down and get them. The way they’ve made the Hydro Rug so that water can pass through it and it won’t even clog the drain if you put it right over it is pretty smart. That means that even if you have a shower where the drain is right in the middle you can still use this and not worry about standing in ankle deep water.

The one thing we couldn’t help but notice is that it’s almost exactly the same product as the Aqua Rug. They both have the same claims, the same price point, and the same features. It seems like a flip of the coin which one you go with, but we figured it out that the Aqua Rug makes more sense if you want to have this in two of your showers, since their per rug cost for two is $18.

We’re giving the Hydro Rug the Solid Try rating, based on a solid concept and a good follow through on the manufacturing process. The best feature that we could see is that you don’t have to worry about this building up a lot of mildew and stains, because it doesn’t get soggy the way carpeting would, and it’s dries up fast thanks to the material it’s made of. This means that every time you step into the shower you’re met with a dry and relatively clean mat so that’s ready to scrub your feet and provide padding.

Our Recommendation
If you’re tired of looking at your dirty bathmat and you cringe every time you step on it, it may be time to give this a go and see if it makes a difference. The higher price can be justified by the fact that you shouldn’t need to buy another mat for your shower for several years to come. They have you covered by a 30 day guarantee, so if you get it home and it doesn’t live up to your expectations you can simply return it and they say that it doesn’t matter what the reason is for your return, it’s hassle-free.

What do you think? Does the Hydro Rug work or not?

← Previous Does BOTOX Really Work?
⚅ back to blog
Next →Does the Tornado Can Opener Really Work?

10 Customer Reviews on “Does the Hydro Rug Really Work?”