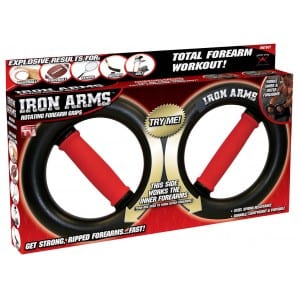 Iron Arms puts the focus on an often overlooked but important muscle: the forearms. It’s also supposed to help strengthen your grip. These muscles can come in handy in any number of sports, including baseball and golf, but also martial arts and other contact sports. But how well can this simple-looking device really work when put to the test. We analyzed user feedback to give you a clear picture on whether this is a good buy.

Overview
The forearms are pretty hard to work out compared to other muscle groups. There’s plenty of exercises available for larger muscles like legs, the chest, and even upper arms. But the forearms are usually only worked out peripherally when you’re trying to target other areas. By the time you think of them your workout is already over and you’re spent.

The Claim
The makers of Iron Arms claim that you can build more powerful forearms, and that you can do it fast. They say that by twisting the grips one way you work your flexor muscles, and by twisting them the other way you hit your extensor muscles. They’ve also got a third exercise that makes it more intense by focusing on one arm at a time. They also say that it’s durable and made to last, but also that it’s lightweight and easy to take it with you and store it.

The Hype
If you’re into sports any product that promises to improve your game is relying on a bit of hype to make the sale. True competitors are always looking for an edge to improve their game and best their opponent. This item tries to make it seem like you’ll be able to get batter at bats in baseball, hit the ball better in golf and tennis, and be able to punch harder in martial arts. That thought alone is enough to propel some athletes into giving this a try.

The Cost
The Iron Arms unit is $28 which includes shipping. It can be found for less by buying in store, but be sure that it’s the same unit and not a knock off. Some users have been able to find them in retails stores for about half the price, and of course you don’t have to pay shipping when you buy it locally. With the 30 day guarantee they have you are able to try it at home and you are entitled to a refund of $20 if you don’t like it.

The Importance of Forearms
You might have noticed by now that your forearms are one of the main reasons why you can’t lift heavier weights in the gym. For example, if you’re trying to do a bench press at a rather heavy weight, your forearms end up getting tired before your pecs do. This leads to you not being able to do as many reps as you’d like, and stunts the growth and development of the muscles that get the most looks. So while they might not be flashy in their own right, they could be preventing you from reaching your full potential in other areas.

Evaluation
When sizing up the Iron Arms system to other ways of working out the forearms, the first thing that comes to mind is the classic hand grips that you squeeze repeatedly. There is also a method that baseball pitchers and other use where you tie a rope to a weight plate and the other end to a wooden stick and then twist the stick to raise the weight. You the twist in the other way in order to work the other set of muscles. But compared to those two methods this is a nice compact unit that has gotten mostly positive reviews.

It’s important to note that if you’ve got access to a gym you can work the forearms out just fine with their own set of exercises. The problem is that most weightlifters spend most of the time on other muscles, and only think of their forearms as an afterthought. By this time they can only do a few reps before exhaustion kicks in because forearm muscles are smaller and are put to some use each time you pick up a weight. If you want to start seeing results try moving forearm exercises to the beginning of your workout, so that you can get them in before you tire yourself out.

The Iron Arms gadget is getting out Thumbs Up review for a few different reasons. The first is that most people have said that it works when used in a comprehensive workout program, and the second is that there’s really a lack of viable alternatives. Of course you’ll definitely want to use this within the confines of an overall regimen tailored to whatever sport you’re going for. It’s definitely no magic bullet, but in games where even the slightest advantage can lead to a victory it doesn’t hurt to make sure you have the complete package.

Our Recommendation
If you like to circuit train, or are particularly involved with the sports that would benefit most from this, i.e. golf, tennis, baseball, and mixed martial arts, it’s worth a trial run. If you can find it in store they’re bold enough to package it so that you can try it right on the spot. In fact they encourage you to right on the box. They wouldn’t be expected to make too many sales if people tried it and weren’t impressed enough to take it home.

What do you think? Does Iron Arms work or not?

← Previous Does Dr. Numb Really Work?
⚅ back to blog
Next →Does Invati by Aveda Really Work?