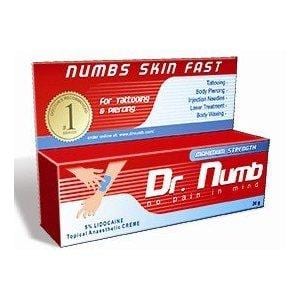 Dr. Numb says that it’s a way for you to get work done on your skin, like waxing, tattoos, and injections, without feeling the pain that’s usually involved. On the surface this looks like a winner right from the start, but this is one of those products where a little research will leave you with more questions than you have answers. So we tried to sift through the information, the misinformation, and the debates to see what actual users are reporting.

Overview
Just because you want to get a tattoo doesn’t mean you have to endure the pain that comes with it. Although some tattoo enthusiasts would say that’s part of the rite of passage into the “tattooed club” others might want one just for the look. The same holds true for those that want to be hair free, as well as pain free. Some of the most effective hair removal procedures entail their fair share of pain, and by sidestepping that pain they become a much more attractive option than shaving.

The Claim
Dr. Numb claims that you’ll be able to get your tattoos done faster because they won’t have to stop so much due to the pain. The same thing goes with waxing and laser procedures for hair removal. They also say that you can use this for injections, either insulin for diabetics or for kids getting their shots at the doctor’s office. They say that millions of users have proven that it’s safe and effective to use, and that it goes on fast and can last up to 4 hours.

The Cost
One tube of Dr. Numb is $54 plus shipping, which might seem pricey at first, but they’ll let you try it out for free for 10 days so you can see if it’s worth keeping. They offer bulk discounts, and say that 5 tubes at $150 with free shipping is one of their best offers. They also have bigger discounts for tattoo shops and waxing clinics so they can have it on hand for patients and clients. One popular sentiment is that these prices are rather high, and that the size of the tubes is rather small.

The Motivation
With the reduction in pain this should represent less of a commitment to procedures that are notorious for being a bit traumatic when it comes to the pain level. In fact, some of the procedures they mention conjure so many memories of painful encounters that they probably get people ordering just so they don’t have to relive them. Pain is a strong motivator, and the thought of being able to get work done on the skin, minus the pain is something that is too tempting for many people.

Evaluation
The reviews are mixed when it comes to Dr. Numb, which is not really something you want to see when you’re taking an all-or-nothing chance on missing out on some pain. They have a 30 day guarantee, but the fine print states that they only on this for unopened tubes. That doesn’t make much sense unless you buy multiple tubes up front without trying it out first. The 10 day free trial appears that you can use it and then call to cancel the charges from happening as long as you’re in that 10 day window, but you’re still charged for shipping.

One way to go is to ask your tattoo artist which numbing cream they recommend. They’re the ones on the front lines seeing what works reliably, and since they’ll be held accountable if you have a bad experience, you can be sure that they don’t have any ulterior motives behind the suggestions they make. They’ll also be able to make sure that you apply it correctly, and then you’ll at least have the peace of mind knowing that if it still hurts that’s just the best that can be done.

Some tattoo artists also say that using numbing creams before getting work done can actually effect the tattoo, and that the pain is a necessary indicator for when the body has had too much for one session. By dulling that sensation you could be taking on too much at a time and it could make the healing process take longer.

Dr. Numb is getting the Thumbs Down based on the large number of negative reviews that it has received. A product like this should basically be universal and have a large percentage of users saying that it works wonderfully. What you see is a split down the middle, with half of users saying it works and that the other half doesn’t know how to use it right. But the fact of the matter is that you don’t want to take a 50/50 chance on something that is supposed to numb pain. If you’re expecting no pain and then get a lot of it, it’s going to hurt worse because you weren’t expecting it.

Our Recommendation
There are a few ways you could feasibly use something like this. One would be if you’ve always wanted to get a tattoo, but didn’t want to take all the pain that comes with it. The other would be if you’ve been wanting to get waxed but know how bad it hurts. It might also come in handy for your young one if they’ve been known to throw a fit when getting their inoculations. We did find one possible alternative, a well-reviewed numbing cream that’s nearly half the price.

What do you think? Does Dr. Numb work or not?

← Previous Does the FlexPen Really Work?
⚅ back to blog
Next →Does Iron Arms Really Work?