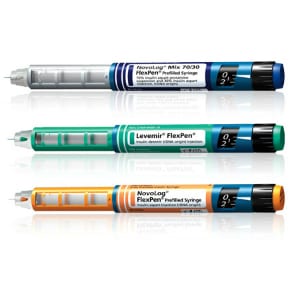 The FlexPen by Novo Nordisk is a way to deliver your insulin without using the traditional vial and syringe. They’ve got both insulin determir and insulin aspart covered through their two brand names NovoLog and Levemir, and they’ve made it all disposable so there’s no need to refill them, you just go to the next one. We looked at what sort of reviews they’ve been getting to see how well they’re working out for users.

Overview
Diabetes dates back at least a few thousand years ago, and human civilizations have been coping with it ever since. These days there are standard testing treatment methods, and for the most part it is easy to control if you have the right supplies. One of those vital supplies is insulin, and for most diabetics taking their insulin each day is a chore they don’t look forward to. And who could blame them? It’s no fun injecting yourself each day, even if it is providing a live saving necessity. That’s why companies are hard at work trying to make the process as pleasant as possible.

The Claim
Novo Nordisk claims that their FlexPen comes pre-filled with the right amount of, and type of insulin that you need, and that it doesn’t need to be refrigerated, making it more convenient. They also say that it’s easy to deliver because it takes just one touch for it to deploy and inject, and uses the thinnest needles on the market. They also claim that it’s the number one selling insulin pen in the world. They’ve got the assets to back up this claim, pulling in tens of billions of dollars in revenue each year.

The Hype
Diabetes testing and insulin delivery systems have been getting more and more mainstream publicity as several different companies are trying to make sure that their product becomes the king of the hill. There are so many ads that sometimes it can get confusing as to which product does what, and which items you really need to make things as easy and as affordable as possible. The good news is that your doctor can help you cut through the hype if you just share with them your concerns and your dislikes. They’ll guide you to the right product that will give you a better experience.

The Cost
They make the cost comparison to using insulin from a vial, and say that there’s 50% more in a supply of 5 pens than you get in a vial, and that this bonus is included in most co-pays, which could be a considerable savings depending on what your co-pay is set at. You’d have to fill your insulin prescription that much less, and aside from the cost savings this would also represent less time and hassle as well.

The Commitment
One of the main features of these pens is that they should make your life much more convenient than using traditional methods of injecting insulin. Using a vial and syringe does seem like a rather archaic way of going about it, and it only makes sense that they’re re-inventing the procedure to make it easier and more efficient. Perhaps one day the process will be so easy and painless that having diabetes won’t be an inconvenience at all, but until then it’s nice to see that they’re making continual improvements.

Evaluation
The FlexPen is produced and manufactured by a trusted pharmaceutical company and has undergone a lot of testing and re-testing to ensure that it will function properly again and again. Precision is everything when it comes to managing your diabetes, and unless they adhere to pretty rigorous standards their products wouldn’t last very long in the marketplace. Added to that is the resounding feedback that it’s been receiving from multiple sources and this merits a trial for many people looking for a better insulin-taking experience.

Common features that are pointed out are the ability to carry it around with you basically anywhere, without the need to keep it refrigerated. Users like that you can simply keep it on hand, and because it’s so easy to inject you can quickly and discretely use it wherever you may be. Many people also like that it’s covered by their healthcare plan, which definitely helps with the decision to give it a try.

There’s little doubt that the FlexPen works, and works well, earning our Thumbs Up review. Because of the ability to dial in the amount you need, this is a way to better manage your condition, and could lead to a healthier happier you. These are only available via prescription, so be sure to ask your doctor about them at your next appointment. You can also ask them about a new blood glucose meter so that you can bring everything into the 21st century and make sure you’re using all of the technology available to you.

Our Recommendation
If you’ve been looking for a way to simplify the treatment of your diabetes, there’s really only a few ways to go about it. One is to upgrade your blood glucose meter, and the other is to modify they way you receive your insulin. When you bring the latest technology to these two tasks you can take big steps towards improving your quality of life, not just when it’s time to take the insulin, but throughout the day as you’re able to take better care of yourself.

What do you think? Does FlexPen work or not?

← Previous Does the Square Credit Card Reader Really Work?
⚅ back to blog
Next →Does Dr. Numb Really Work?

5 Customer Reviews on “Does the FlexPen Really Work?”