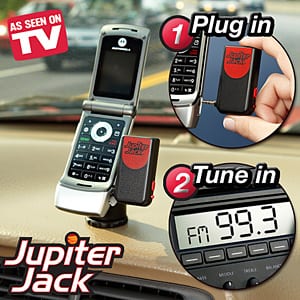 Not only does Jupiter Jack make using your mobile easier, it can also save you from getting a ticket, and even save your life. At least that’s what it claims to be able to do. It’s designed to broadcast your phone calls to your car’s sound system. But does it work the way Billy Mays says it does?

Overview
Plenty of states have enacted new laws that make it illegal to drive while using your cell phone in your hand. Bluetooth systems have become popular as an alternative, but these involve wearing an earpiece that can be uncomfortable, and can fall off while driving. Jupiter Jack tries to address all of these problems with one solution.

The Claim
The claim made by Jupiter Jack is that when you plug it into your phone it will take your caller’s voice and send it to your car’s radio, thus giving you surround sound for your phone calls. It also adds a more sensitive microphone, so your voice is picked up clearly on the other end. It is said to give very clear audio, and if it’s too quiet you just turn the volume up on your radio dial.

They also say that you’ll be able to tune into 93.3 or 88.7 on your FM dial and instead of music you’ll hear your calls. It’s supposed to work regardless of whether there are stations broadcasting on those channels. Reports are that this is not the case, and Jupiter Jack has trouble overpowering the radio signals if there are radio channels near these stations. If you live in a big city, there most likely are radio stations on those dial spots.

The Cost
Jupiter Jack comes with a buy one get one free just pay shipping offer. So you end up with 2 sets and pay $24 if you don’t upgrade your order with any accessories. If you just want one you can order them individually from Amazon.

The Commitment
All you are required to do is plug the Jupiter Jack into your headphone jack on your mobile phone. It then does the rest. Your phone works like normal, and you can now drive your car hands free with nothing on your ears, and no phone in your hands. They still haven’t come up with a hands-free way to text message, but someone must be working on it somewhere.

Evaluation
Something fishy is going on, because based on real world testing, the Jupiter Jack delivers. But so many people have reported having problems with it. Many of these problems refer to the ordering process, and not the actual product. It’s true that they’ve decided to mar this product with a scam-like order page.

The first clue was the horrible “must buy two” disguised as a free offer that they impose on all buyers. But they also try to upsell you on getting a dashboard mount. A dashboard mount would be a great idea, but they also make you take two of these as well, and charge you shipping for both. IF you can manage to avoid all of their other upsells you’ll be lucky to get out of there with your wallet still intact.

The strange part is that many people have tried it out and documented that it does in fact work, and works like a charm. Perhaps there are just many faulty models, or these people live in the perfect conditions where Jupiter Jack just works like it should.

We’re going to have to give this product the gong. It just doesn’t add up that they are basically giving it away now. It’s strange that they would simultaneously offer this for over $20 at their official site, and also send it off for less than $5 at Amazon. We believe that they are liquidating their inventory, and will not be coming out with a Jupiter Jack 2.0 that addresses the negative feedback from so many users.

Our Recommendation
Give it a try. For less than an Abraham Lincoln you can have it delivered and put it to the test with your specific phone in your specific car. If it doesn’t work, oh well, you’re only out a fiver.

What do you think? Does Jupiter Jack work or not?