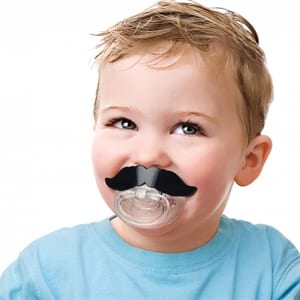 The Lil Shaver Mustache Pacifier is supposed to turn your little one into a mustached version, and keeps them quiet at the same time. As parents, we’re always looking for ways to embarrass our kids, even when they’re too young to know we’re doing it. But thanks to the magic of digital cameras you can immortalize the moment and show it to them later when they can appreciate it.

Overview
Novelty pacifiers are all the rage right now. You can get ones that make your baby look like they have giant buck teeth, or big puckering lips. You can even get ones that make it look like your baby is wearing a grill piece like a gangster rapper, or has vampire fangs like Dracula. There really is no limit to the number of pacifiers you can get to make a statement with your baby’s mouth. It all depends on your tastes and what sort of visual effect or gag you’re going for.

The Claim
The Lil Shaver mustache pacifier doesn’t make any claims as to what it can do, it basically just shows a picture of a baby wearing it, which seals the deal in most cases. Once you see what it is you basically want it or you don’t, so they don’t really need to make a hard sell. So the real question is whether or not it actually pulls off the look of having a mustached baby or not.

The Hype
These pacifiers have been creating some buzz, even being featured on the Jimmy Kimmel show. Once you see them you sort of want one, just because they’re clever and good for a laugh. This is the sort of product that creates it’s own hype by word of mouth, and the viral nature of seeing it and then going out and getting your own.

The Cost
You can pick up a Lil Shaver mustache pacifier for around $10 at different online retailers, which is more than you’d typically pay for a pacifier, but since it’s a novelty item we’re going to have to allow it. It comes in different styles as well, so you can pick and choose between wavy and smooth mustaches,

The Commitment
Just like with any pacifier all you’ve got to do is pop it in your baby’s mouth and they take care of things from there. It provides the same benefits of a regular pacifier, keeping them quiet when they’re fussy. You’ve got to commit to putting up with people commenting about your baby and their pacifier, so if you’re the type that like to keep to themselves then this might be more than you’re willing to handle.

Evaluation
They make the Lil Shaver mustache pacifier with BPA free materials, so they understand the kinds of concerns parents have about what they give their kids. When you pop it in their mouth it provides the exaggerated illusion that someone has come by and drawn a cartoon mustache on your little one, the same way they do to posters and paintings to vandalize them.

Lil Shaver mustache pacifier works for a laugh. It’s definitely a head turner, and makes for some fun photos to post on Facebook. It’s the sort of thing that your kid will end up hating you for later, which is pretty much 100% of the point of getting it. If the thought of your kid resenting you for the embarrassing baby photos later in life is a turn off for you, you might want to take a pass on this one. But if they end up with your personality they’ll probably think it was funny, and have a deeper respect for your zaniness.

Our Recommendation
If you want a conversation starter, this is the way to go. People just can’t resist making a comment or laughing when they see it, so it’s great as a novelty item. It’s also something that can make you smile as well, since your baby will likely strike a pose with it that makes you laugh. Overall it’s just a fun item that takes an ordinary pacifier and adds a bit of humor to your day.

What do you think? Does the Lil Shaver Mustache Pacifier work or not?

← Previous Does the Zero Germ UV Light Toothbrush Sanitizer Really Work?
⚅ back to blog
Next →Does Stamps.com Really Work?

2 Customer Reviews on “How Cute is the Lil Shaver Mustache Pacifier?”