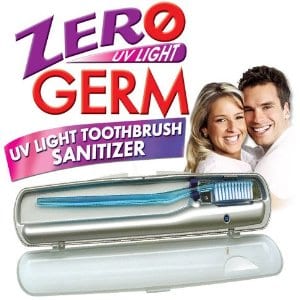 The Zero Germ UV Light Toothbrush Sanitizer is trying to make it into your morning and nightly rituals as the place to store your toothbrush and get it nice and clean. By using a UV light it says it kills the invisible nasties that are lurking on your brush ready to infect your mouth and body. But does this really work at killing germs and making you healthier?

Overview
There’s a common opinion held by many that says you should keep your toothbrush at least 6 feet away from the toilet. This isn’t always possible in smaller sized bathrooms, and therefore having a case for your toothbrush may be a possible fix. This goes one step further and has a UV light positioned directly in front of the bristles that is supposed to kill unseen bacteria and give you a clean brushing experience every time.

The Claim
The makers of the Zero Germ UV Light Toothbrush Sanitizer claims that their UV light works as a germicide to keep your toothbrush free from harmful germs and bacteria that could be making you sick. The UV light on the unit is located right next to your brush head so that it can do its job. They say it has an automatic timer so it automatically shuts off when it’s done. This helps preserve battery life and makes it a set and forget item.

The Hype
The television promo really tries to exaggerate the problem of an unclean toothbrush. First it starts off by saying that your toothbrush can infect other toothbrushes with germs. Then it brings up the possibility of toilet germs filling the air with each flush. They bring up the possibility that you might get sick by using your toothbrush. They say it kills off the H1N1 virus and swine flu, which seems like they are preying on people’s fears or at least trying to tap into the paranoia and capitalize on it.

The Cost
You can pick up a Zero Germ UV Light Toothbrush Sanitizer for $20 or less at various online retailers, and some buyers have said they’ve found it for less at discount stores. You’ll have to also factor in the cost of batteries since it’s battery powered, and the ongoing cost of replacing the batteries as needed as you go along.

The Commitment
You’d have to make this a part of your daily routine for it to be able to do its job. After using it for several days it would be something that you wouldn’t have to think about any more, and would just be incorporated into your automatic

Evaluation
The Zero Germ UV Light Toothbrush Sanitizer is based on the idea that UV light will kill the bacteria that is left on your toothbrush after brushing, and also shield your toothbrush from picking up bathroom germs from your toilet or sink. It’s supposed to kill the bacteria in 6 minutes, so your brush will definitely be ready by the next time you use it. It would be nice if there were some sort of official tests done on this to prove its effectiveness, but that would be pushing it for a product at this price point.

There’s also the contrary opinion that putting your toothbrush inside a confined enclosure like this would actually be a breeding ground for germs, since often your toothbrush is wet when you put it away and this would trap that moisture in with the brush. One quick fix would be to dry your toothbrush off after use. Some have raised the debate as to whether this is able to enough power to the UV light for it to be able to do its job.

The Zero Germ UV Light Toothbrush Sanitizer gets mixed reviews with several people saying that theirs broke down within a few days, and others saying that it didn’t work from day one. Others say it works fine and hasn’t let them down. For this reason we’re giving it a Try rating, but you basically have to believe in it for it to be a good buy. If you have your doubts or are skeptical that it can do what it says, it’s better to try the free solutions presented below.

Our Recommendation
One way to make sure you don’t put a germy toothbrush in your mouth is to let the toothbrush dry completely between uses. This requires buying two toothbrushes for yourself, one for mornings and one for nights. That way the brush has a full 24 hours to dry, and plenty of the bacteria that would be on partially damp toothbrush will have dried up and died before you put it into your mouth. Another possibility is to use an antibacterial mouthwash like

What do you think? Does the Zero Germ UV Light Toothbrush Sanitizer work or not?

← Previous Does the Minden Anytime Grill Really Work?
⚅ back to blog
Next →How Cute is the Lil Shaver Mustache Pacifier?