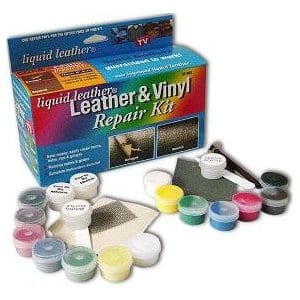 Liquid Leather has been around for a while now, and there’s an old school infomercial to prove it. It shows somebody taking a knife to a leather sofa and then having it repaired without any sign of damage. Looks like a winner, but as we all know things aren’t always what they seem with as seen on TV items. So we took a closer look to see what users say.

Overview
Leather is a great substance to have because it is durable, yet soft to the touch. Even though it is made to stand up to some wear and tear, it’s not invincible, and if you’ve had a mishap with it you’ll quickly realize that it’s not the easiest thing in the world to fix, and often times it will be beyond repair on your own and you’ll have to take it to a leather repair pro. The estimates might make you wish that you hadn’t decided on leather, since it can often add a hundred dollars or more to fix a simple tear.

The Claim
Liquid Leather claims you’ll be able to save yourself from expensive leather repair costs, or even from having to throw away leather items due to damage. They say that it color matches to the leather, and they include an assortment of colors to try to get it as close as possible to the color of the item you’re trying to fix. They say that with the kit you’ll be able to use your own iron to transfer it right onto the tear so that it bonds with the leather and brings it back to like new status.

The Hype
When you damage a leather item it can really be frustrating, because often they are more expensive than their non-leather counterparts. For example, a leather sofa will usually cost more than one that isn’t, a leather car interior is an upgrade when purchasing a car, and genuine leather jackets can go for hundreds of dollars. That’s why a product like this that sells for so little will have some hype to it, because the idea of fixing an expensive item with a cheap repair kit is very appealing.

The Cost
You don’t have to go through the old sales channel, now you can get a Liquid Leather kit through Amazon and other online retailers for around $10 or so. The price is suspiciously cheap, since it was originally sold for $20 or more. When this happens it’s usually because there was a negative response from users, sales dried up, and the company went bust. That seems to be the case here, but the price is just one clue. At this price you may be tempted to just try it for yourself and see what happens, but keep reading.

The Commitment
Since you’re trying to fix this yourself there’s more commitment involved than letting a leather repair shop take care of it, but that’s the trade off for the lower price. This is a multi-step process and you’ll not only have to match up the color, but you’ll need to heat up the iron and try to fit this to your tear so that it looks the way it did before. They say that full instructions are included, but that doesn’t necessarily mean that you’ll be able to pull it off.

Evaluation
Liquid Leather is almost universally panned by users, with complaints stemming from it being mostly a paint, to it not drying in time, and the color matching not working. It’s not surprising that many people seem to have a problem with it, because it involves a lot of messy steps and the use of a hot iron, so you’re going to get people burning the leather, burning themselves, and making a mess of things. But even when the overcome all of these hazards, the consensus is that it just doesn’t do what it’s supposed to do.

It seems like they’re not actively trying to sell this, there’s no official website and what likely happened is they produced thousands and thousands of these kits and weren’t able to sell them all so they’re just trying to get rid of the remaining inventory. It’s not like they’re offering a new and improved version, and this is the same product that was being pitched on their dated infomercial. Sometimes you see older products stand the test of time and go through an evolutionary process, but not with this one.

We’re going to recommend taking a pass on Liquid Leather. It seems that it just doesn’t work, and it can end up damaging your leather items even more than they already are. There’s a high probability for user error, and even if you do a perfect job with everything the end result is that you can tell the leather has been repaired, which sort of defeats the entire purpose. When they show that sofa being repaired after the knife went through it, it’d be far too easy to use a picture of it before the puncture as the after repair picture.

Our Recommendation
If you’ve got a damaged piece of leather your best best is to have it tended to by a professional. It may be more expensive, and it might even turn out that you have to replace the item because that’s the cheaper way to go, but leather repair kits like this one are known as being a poor alternative to getting it professionally repaired. If it’s not an especially important item, you may be tempted to give this a go any way and see if you can get it to work, but just go in knowing that it will probably be a fiasco.

What do you think? Does Liquid Leather work or not?

← Previous Does the Justin Bieber Singing Toothbrush Really Work?
⚅ back to blog
Next →Does the Paleo Recipe Book Really Work?