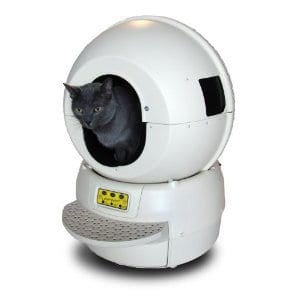 The Litter-Robot looks like a Space Age litter box that is supposed to automate the process of cleaning out the cat litter. If it works as advertised it would mean a great deal less time getting up close and personal with your cat’s business, which would make a lot of cat owners happy campers. So let’s see how it’s faring.

Overview
Owning a cat is relatively easy work, since they’re automatically potty trained, clean themselves, and generally don’t need a ton of attention. But cleaning out the litter box is one chore that no one really likes to do. When it starts getting neglected it can really stink, and then it becomes a bigger task. There are a few different automated litter boxes on the market, which are designed to make it as easy as possible.

The Claim
The makers of the Litter-Robot say that it’s the best automatic litter box you can buy, and that it cleans itself up. They say that you can use any clumping litter, and that you only need to empty the tray once a week if you have one cat. They say the receptacle works to stop odors, which is why you don’t have to clean it out as often. They say it uses ordinary kitchen bags so you don’t have to pay for any special litter bags once you buy the unit.

They also say that their unit can save you money. They say you’ll buy less kitty litter because it does such a good job of sifting out the clumps and leaving fresh litter behind. They also say this helps you be more green, since you’re using up less resources over time and getting the most out of the litter you do buy.

The Hype
Having a litter box that cleans itself out is pretty futuristic, and something cat owners could have only dreamed about 50 years ago.

The Cost
The cost of $340 for the Litter-Robot is something that is going to cause many would-be customers to put the brakes on. Competing products like the Litter Genie going for far less, and while it may not be automated, it does keep things odor free. When you compare it to other automated systems like the Cat Genie, you’ll find that it’s a little more expensive, but it is a bit more stylish.

The Commitment
The basic draw to this product is that it should reduce your commitment level when it comes to cleaning out the cat litter. Since cats can be pretty particular about the condition of their litter box, it’s important to keep it looking tip top so that they always have an inviting place to go. If it start piling up in there they may decide to go elsewhere, which is definitely not ideal. So this should help to make sure that they always go where you want them to, and the house doesn’t start stinking because you fall behind on litter duties.

Evaluation
The Litter-Robot is getting stellar reviews on the latest model, the LR2. The way it works is that the entire globe rotates, and there is a sifter that all of the litter passes through as it turns upside down. When it reaches the height of its ascent the receptacle at the bottom is exposed, the litter drops in, and it begins its decent back to it’s regular position. It overshoots its mark a bit for the litter to settle in just the right position and not be slanted. When it finishes its process it’s ready to be used again.

If you have multiple cats this product is almost a necessity. Claim your life back from constant litter sifting and general odor permeating the house. This is great when you have 2 or 3 cats, and has even been tested in homes with 5 cats and comes out with flying colors. There are some things you’ll have to get used to though. The sound can be a bit loud, and the rotation process does take a while to complete. However, this is something that you get used to in time, and as far as reliability goes it provides consistent results each time it needs to rotate.

They’ve built in several safety features to make sure that your cat doesn’t end up in harm’s way. A sensor detects whether they’ve returned to the scene and resets the 7 minute timer. If you cat gets curious and attempts to get back in while it’s moving – most cats won’t due to the sound – it shuts itself off so they don’t go tumbling around in it. It also moves rather slow so it doesn’t pose a huge threat, even at its most dangerous times.

We’re giving the Thumbs Up rating to Litter-Robot for making a trouble-free experience out of cleaning the cat litter. Since it doesn’t require any extra plumbing or fixtures like the Cat Genie, we’d have to say that it’s the better value for the dollar.

Our Recommendation
Cat ownership shouldn’t have to be a struggle, and this can really help to make that a reality. It has a larger upfront cost, but most owners admit that it was worth it, and that it does provide cost savings over the long run. But it’s the time savings that really add up, and this can be a great boost to your quality of life once it’s in place and doing its thing.

What do you think? Does Litter-Robot work or not?

← Previous Does Chip-Tastic Really Work?
⚅ back to blog
Next →Does the Tangle Teezer Really Work?

287 Customer Reviews on “Does the Litter-Robot Really Work?”