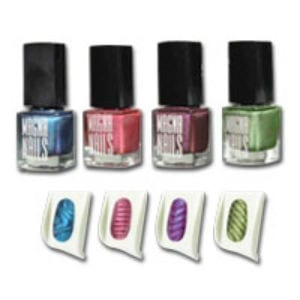 Magna Nails is an at-home nail kit that harnesses the awesome powers of magnetism to create stunning effects for your nails. OK, maybe we’re being a bit overly dramatic, but if you’ve seen the infomercial you know what we’re talking about. But does it really work?

Overview
There are dozens of different nail styles that you can get at the salon, some sparkle, some are glossy, and others have studs and rhinestones glued onto your nails. With so much to choose from and so many new trends becoming popular it’s hard to keep things current when it comes to your fingerprints. And most of the time all you can do on your own at home is simply polish your nails. Boring!

The Claim
The major claim made by the makers of Magna Nails is that you can create a salon-quality nail job at home, for far less than you can at the salon. The “magna” in Magna Nails is for the special magnets they send you that actually lift up the metallic substances in the polishes and create the effects. It’s pretty cool to watch it happen, and they make it seem pretty easy, as it’s just a matter of holding the magnet in place and letting it do its thing.

They say that this can work on both types of nails, natural and artificial varieties. This is important to note because it means you can have a set of acrylic nails put on at the salon for a relatively low cost and then do the design work on your own at home, cutting the cost in half and getting the best of both worlds.

The Hype
Doing your own nails at home is a growing trend, and more and more products are hitting the market trying to capitalize on it. There is a huge gap to be filled because people are tired of paying high prices in salons and being forced into for lack of a better alternative.

The Cost
They have Magna Nails set up so that you get the basic set for $22 which includes shipping, or you can choose to have their bonus offer added for an extra $7 bringing your total cost to $29.

The Commitment
You won’t have to go to the salon to get a pretty cool look anymore, and breaking that cycle can mean a lot of saved time and expense. At the same time though you’ll need to learn how to use this, even though it does seem pretty easy. There is always a bit of learning when it comes to new products, so you have to be patient if you make a mistake at first until you get the hang of it.

Evaluation
The Magna Nails system relies on magnets and the specially designed polish in order to create the effects. While there is room for user error here, it is minimized when following the directions precisely.

We’ve determined that it’s actually better to get the bonus offer, because you are getting twice as much product while still keeping your total cost at less than $30. You get twice as much polish, and twice as many design magnets, so you’re really maximizing the chances of whether or not you’ll like it. If you consider that you’re getting four polishes for $22 that represents a cost of $5.50 a bottle. But with the bonus offer in place you’re getting 8 bottles of polish for $29 or $3.63 a bottle. That’s a considerable savings, and it will take you twice as long to run out and need to order more. You’ll only get the same $15 back if you don’t like it, but with double the chances of success that becomes less of a likelihood.

Magna Nails is getting our Solid Try rating based on a number of factors. First, the initial feedback it’s received has been positive. They have this set up so that you’re not obligated to take the bonus offer, but you can if you want. Most companies use this as a way to inflate the total cost and ship more product, but here they give you the option, which is a nice touch. Also, it’s in their best interest to supply you with a working product because it’s consumable, and when you run out they want you to reorder.

Our Recommendation
This is worth a try because of its low price point, and the cool features it brings that we haven’t seen before on any of the other DIY nail kits we’ve reviewed. It really is a novel idea, and being able to do it at home rather than having to go to a salon is a big plus. If you’re hesitant you can opt out of the bonus offer, just get the basic kit and test it out for $22 shipped to your door. If it’s a total disaster you can return it and they’ll give you $15 back. Not a bad deal.

What do you think? Does Magna Nails work or not?