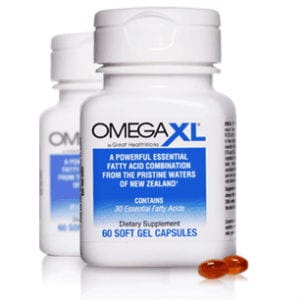 Omega XL is a joint pain relief formula that claims to use a marine-based “super oil” to provide the body with the omega-3s it needs to fight inflammation and the side effects it brings. But what most people want to know is whether or not it’s worth trying.

Overview
There are plenty of all natural joint pain remedies on the market right now, and many focus on the anti-inflammatory properties of omega-3s as their method of treating these sort of symptoms. The benefit being claimed is that since it’s all natural there is less possibility of harmful side effects, and it’s preferable to using prescription drugs if you’re figuring to be on medication for your joint pain for the long term.

The Claim
The makers of Omega XL claim that you’ll be able to get relief from joint pain the same day that you take it. They also say that it is made with a patented marine oil that is all-natural, and backed by over 30 years of clinical study. They say it can help with the stiffness often experienced in joints as we age. It should make the joints more flexible and mobile than they currently are. They say that due to the smaller size of these gel caps they’re easier to swallow than conventional fish oil capsules. No time frame is claimed as to how fast these results are supposed to occur.

The Hype
Fish oils have been marketed heavily over the last 10 years or so, riding on the success of the book The Zone Diet to enter the mainstream consciousness of why getting fish oil with omega-3s is important. But the thing is that he recommended pharmaceutical grade fish oil so you have to be very particular about what you’re putting into your body or it doesn’t make sense to go through the motions.

The Cost
The per bottle price of Omega XL is $60 for 60 capsules, which represents a two week supply if taken daily as directed. If you sign up for their auto-shipment they’ll send you a free bottle so you’re getting a one-month supply for $60. You can also get some savings by buying larger bottles, for example you can save $20 by buying a 120 count bottle for $100 or a 5 month supply for $206 and avoid the automatic charges. They say this is all covered by a risk free 90 day guarantee,

The Commitment
Since this comes in pill form you’re not really committing to much more than taking the pills as directed. Of course if you do see results with this you’d be committing to taking them as long as you want to receive the benefits, which some aren’t willing to do. When you consider taking any sort of supplement for the long term, you always have to scrutinize it even more than something that is only meant for the short term.

Evaluation
There are a few inherent problems when it comes to Omega XL. The first is that there’s just too many people saying that it flat out didn’t work for them. That’s hard to look past, especially since there are others that are reporting negative reactions to it. We were able to find a few users that said it worked for them, but these were few and far between, and could almost be written off as statistically insignificant when looking at the larger pool of data.

If you’re shopping around for a way to get rid of joint pain, and you’re set on getting one that is peer reviewed and gets the go-ahead from other consumers, this isn’t it. Although we have found there are some that are worth trying, such as Joint Juice which earned our Solid Try rating due to a combination of positive customer feedback, price point, and quality of ingredients.

Omega XL is getting our Thumbs Down rating, based on a considerable amount of negative user feedback, and the fact that their labeling is potentially misrepresentative of what you’re getting, and at the very least confusing. For a product of this nature we’d expect to see a large majority of users express happiness with their purchase, and that’s not what we’re seeing. Even if you look past the complaints with the ordering and billing process, of which there are many, the underlying feedback shows that even those that didn’t experience a billing problem were underwhelmed with the results, or lack thereof.

Our Recommendation
This is a product you can safely avoid buying, and taking. We found no substantial evidence that would prove that this works, or that it contains the ingredients listed on the label. The unfortunate part of all natural products is that there’s no governing body that monitors them, or investigates their claims, so you really have to trust what you’re putting into your body and what these companies are saying their products contain.

What do you think? Does Omega XL work or not?

← Previous Does PhotoReading Really Work?
⚅ back to blog
Next →Does Magna Nails Really Work?