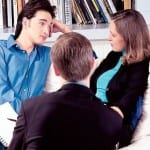 If things have come to a head in your relationship, and you are turning to marriage counseling, you may have that nagging question on whether or not it works. For many couples this represents the last stop of the train before divorce, which only adds to the pressure put on therapists to save everything in the final hour.

Overview
With a divorce rate of about 50%, marriage isn’t all that it’s cracked up to be, and sooner or later wedded bliss can turn into resentment, anger, jealousy, infidelity, and all sorts of other relational problems.

Getting married is no magic wand, and it doesn’t mean that you are now different and not a human being in a relationship with another human being. Life happens, people can grow apart, they can take each other for granted, they can cheat on each other, or just get tired of seeing the same person every day for years.

The Claim
The last ditch for many married couples is marriage counseling. When they’ve tried to work out their problems on their own, consulted friends, read self-help books, searched Internet forums, and pushed things as far as they can go they will finally think of professional counseling as an option.

It is often viewed as a very serious matter, because if it fails it can be the end of the marriage, as nothing else is believed to be able to work if marriage counseling doesn’t. However, this is a little unfair for the therapist, who is new to the situation and is trying to get a read on what the real problems are.

There aren’t any strong claims made by marriage counselors, but it is the general belief among many that counseling can make all the difference in a marriage, and get things back from the brink of divorce, and back to the honeymoon phase again.

The Hype
There’s not a lot of hype surrounding the issue, but many people will use it as the final act of desperation when their marriage is already in the toilet. Thinking something will save you in your time of despair, or be able to fix all of the problems in an afternoon that you took years to create is a form of buying into the hype.

The Cost
The cost of a marriage counseling session will vary by the therapist, whether you’re in a group or a personal setting, and how many sessions you’ll need.

The Commitment
For marriage counseling to have any positive effect on your relationship, both you and your spouse have to be on board mentally. If either one of you is not taking it seriously then it won’t produce any results, and could even lead to a worsening of your relationship. For example, if you bring up the issue of going to marriage counseling, and it doesn’t work out, you might be blamed for having the stupid idea of going, and if you try it and it doesn’t seem to work, you may strengthen your belief that your marriage is beyond hope.

Evaluation
The methods that are employed by marriage counselors are always changing and evolving as we learn more about the human brain, and about how relationships work in general. It is also taking into account the new world we live in, with the Internet, online dating, and the like. Some therapists have a higher success rate than others, so it’s important to find one that gels with your own beliefs and whose practices you both can subscribe to.

Marriage counseling is similar to a workout program. If you follow the steps necessary and listen to the therapist you will see results over time. Most people stop going, or use the counseling sessions as ammo in their arsenal for the next argument. This is counterproductive to the end result, and will only leave things in a state of quagmire.

So yes, it works, but it takes two to tango. One person cannot salvage the relationship alone, and it’s essential that you both bring an open mind and a sense of purpose to the table. Only then will you be able to stop taking steps backward, and start moving forward with your marriage once again.

Our Recommendation
You shouldn’t view marriage counseling as the last chance to save your marriage. If you wait until the 11th hour to get some professional help, it may be hard for anything to be done. There’s always reason to hope, but you have to take a rational approach to the matter. You didn’t get into this predicament overnight, and you won’t snap your fingers and have a loving marriage again instantly.

It’s going to take hard work and dedication, but if your spouse means as much to you as they should, it’s worth the investment in both time and money. If you can rekindle that loving feeling you once both felt for each other, it can make all of the difference in the world.

What do you think? Does marriage counseling work or not?

← Previous Does African Mango Really Work?
⚅ back to blog
Next →Does Contour Abs Really Work?