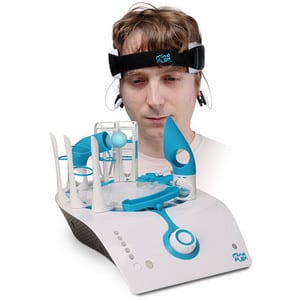 Mindflex is a game that takes things to the next level, literally. You don’t use your hands much, and the idea is that your brain is controlling the action here. Critics say it’s not really your brain that’s controlling much at all, but it still seems to entertain people and gives the appearance that it works. So what’s really going on here?

Overview
The boardgame industry is actually a pretty competitive marketplace, and all of the companies will always try to outdo each other. Mattel is taking things to a whole new realm by incorporating something as scientific as your neuro-activity and making a game of it. Some say that is is nothing but a farce, or novelty item, while others claim that the game really does respond to their level of concentration and they enjoy manipulating the ball through the different obstacles on the board.

The Claim and Criticism
The claim is that it’s your brain waves, or brain activity that is controlling the ball. Critics say that is not the case at all, and that the game is actually doing the manipulating of the ball regardless of what your brain is doing. It wouldn’t take much for the game to simulate different actions, and if you take the blame for what the ball does even if it doing something that you don’t think you’re causing, they’ve got you.

For example if you want the ball to go one way and it goes the other, you might just assume that your brain is the problem, when in fact it’s not correlating your brain activity to the ball’s activity at all.

The Hype
As technology advances things like this become more more feasible as something that could work. We can expect more things like this to come in the future, including virtual-reality machines and 3-D aiming systems that immerse us in different worlds. But today might not be the day where we are able to control games using our brain waves.

The Cost
You can find Mindflex online or in stores for around $80. For a game made by Mattel that’s on the high side of things, so you better be sure that huddling around a machine that blows a ball around is something you want yourself or your kids to be doing.

The Commitment
You have to commit to wearing the rather cumbersome headset that puts sensors on your temples and also connects clamps to your earlobes. Some say this allows the machine to pick up on your brain waves, but critics of claim that it’s just an elaborate getup to make you believe that it’s actually connecting to your brain in the first place.

Evaluation
Some users point out that it’s actually a fan that is making the ball float in the air, but the claims made by Mattel are not that your mind is making the ball float, just that your level of concentration is controlling how hard the fan blows. After observing repeated uses of the device, it’s pretty clear to see that the machine pretty much just does what it wants, and also allows you to manually override it with control knob.

Mindflex Duel
While Mindflex is designed for just one person to keep themselves busy with a mental obstacle course, Mindflex Duel pits your concentration against an opponent to see who can focus more. You might feel a little silly literally going head-to-head with your opponent, but it could be fun to see who is able to focus their mind more than the other.

It’s hard to watch people using Mindflex and thinking that they’re having a good time. It seems like it’s not very fun, and would only be a novelty item that loses its appeal after a few minutes. Our opinion is that the game creates the illusion that you’re actually moving the ball at your mind, but really it’s just on random and your brain is actually compensating for the difference.

Our Recommendation
Since Mindflex is considered a game, we have to compare it and contrasted against the other more successful games out there. We still prefer a good old game of Monopoly over something like this, as it gets you involved with other people, and still requires a good amount of mental focus and concentration. In our opinion it is more fun to out-think your opponent than it is to out-concentrate them.

What do you think? Does Mindflex work or not?