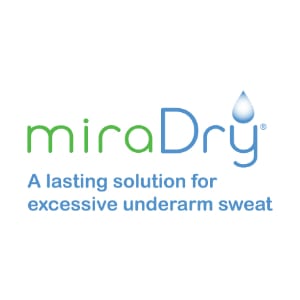 If you suffer from excessive sweating, miraDry may be the solution you’ve been looking for. It involves going in for a procedure whereby they use microwaves on your armpits to help stop the sweating. But is it safe and effective?

Overview
For the large majority of the population, excessive sweating is not an official medical problem, and only a small percentage actually sweat more than what is considered normal. But some of us just might want to curb the sweat production, even if doctors don’t agree that it’s too much. Perhaps it is effecting work performance, or simply creating awkward situations in your life. Whatever the reason, you might have decided to put a stop to it.

The Claim
The big claim from miraDry is that you’ll be able to stop the excessive sweating from the underarms and have normal production levels, or even produce less than normal levels. They say you’ll have no down time, and that you’ll be able to go about your day as normal after you have it done. They also state that no incisions or cuts take place, so you don’t need to be anxious about the procedure. They say to ask a miraDry physician if it’s right for you, but we say you should ask your own physician if they would approve of it or not.

The Hype
The hype comes from this making the different news channels as a quirky story that they would shed some light on. It is interesting to enough people, and it has been making its way onto television programming as well. Today’s shows featuring doctors like Dr. Oz and all of the doctors on The Doctors always have segments that showcase new procedures like these, and have a way of framing them as being the next big trend, or an advanced solution to an age old problem.

The Cost
This is what puts it out of the realm of possibilities for most people. At $3000 for a few treatments that are not permanent, and for something that isn’t covered by insurance, that is one elective procedure that few can handle. Perhaps if the results were permanent it would be worth it, but you’ll have to go again at some point in the future and pay the price again. And that’s assuming that you can get good results from just two treatments.

The Commitment
The commitment level depends on how you look at it. Compared to doing nothing your commitment level is very high, but if you leave the problem alone it will not go away. If you compare it to other treatment options, like having BOTOX injected into your sweat glands, it’s about the same. But since this is an non-invasive procedure it might be a little easier on you pain-wise. And since the underams are a rather sensitive area, this might be the better option.

Evaluation
Doctors endorsing the use of miraDry will most likely have a vested interest in it, i.e. they are wanting to do the procedure on you and get paid. Doctors that don’t have any affiliation with the company seem to be taking a wait and see attitude towards it, which is very in line with the scientific method. It’s as if this is still in the guinea pig phase, and those that are having it done are first adopters that don’t care to wait to see the details or long term effects, they just want the short term benefits of not sweating as much any more.

One thing to consider is that your sweat glands serve an important function in the body, and the sweat you’re releasing is meant to flow out of you naturally. By taking steps to make yourself sweat less you are inhibiting the body’s natural avenues for getting rid of fluids. More studies need to be conducted on the ramifications of doing this to yourself.

By medical standards the results and tests to this point are inconclusive, and more unbiased trials and research need to be conducted before a final analysis can be made regarding safety and efficacy. We’re giving it our Risky Try rating, since it’s so new that there are no long term studies on what it does to the body in regards to blocking sweat from flowing out. Also, as far as value for the dollar goes, it seems a bit excessive for a procedure that will need to be done again.

Our Recommendation
Unless you have a bona fide medical condition whereby you’re sweating profusely from your armpits, this seems to be a very expensive procedure that yields long-term, but still temporary results. Also, the health ramifications are still unclear, so if it is just an annoying problem for you, you might want to see about solving it through other means before taking this extreme step.

What do you think? Does miraDry work or not?

← Previous Does Licefreee Really Work?
⚅ back to blog
Next →Does Ballet Body Really Work?