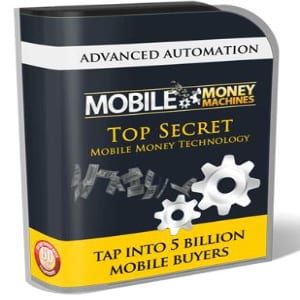 Mobile Money Machines is trying to capitalize on the mobile phone market, which as you would imagine is blowing up right now and only expected to keep trending upwards. More and more apps are being developed for iPhones, iPads, and iPod touches, as well as Android devices, that there’s a seemingly limitless amount of advertising space that can be taken advantage of.

Overview
Mobile phones are just getting started really, and they’ve already taken a big chunk out of the searches that are done from the main search engines. When people need to do things like check the weather, check their email, or even play a game, they are doing it from their phones. By placing ads next to all of these applications, there are so many ways to make money, it makes your head spin. But this would definitely be one of those programs where it takes money to make money, because it involves buying space on these ads to promote your goods or services.

The Claim
Mobile Money Machines claims that you can leverage this mobile trend and make money from the millions of searches, games, and apps people are using on their various devices. They claim that you just need to use mobile advertising to generate a list of phone numbers, and then market to those numbers the same way you would to an email list. However, most people have said that the claims made during the pitch are not backed up by the product, and we couldn’t find a single glowing review of this system.

The Hype
There is a bit of hype here, because there’s no telling how long these mobile platforms will be around. There will no doubt be something that comes along and replaces this system, as technology improves and more and more start up companies emerge and claim market share.

The Cost
Mobile Money Machines is $5 to get started, but then bills at $50 a month until you cancel. Typically, we don’t recommend going with money making programs that charge a monthly fee, unless they can convince us that there is enough true value to stay on.

The Commitment
You have to commit to learning the strategies, and put action to the knowledge you gain. If you don’t apply what you learn to taking actual steps in the real world, then it is largely a waste of time and money. You’ll also have to put some money on the line, so if you are looking for a program where you can use sweat equity instead of money, this isn’t for you. You’ll have to trust blindly in it as you wager you’re cash and hope that what they teach actually works.

Evaluation
The concept behind Mobile Money Machines is a good one, as mobile is definitely where things are headed. More and more people rely on their smartphones and other mobile devices more than they do a desktop or laptop, and the trend will only continue as they make these devices easier to use. However, most of these mobile programs end up requiring you to spend money in the form of Pay Per Click ads, they just don’t use the typical programs like AdWords, they want you to use AdMob, which was bought by Google a while back, and is basically AdWords for the mobile market.

So you are putting up money to test out the theories in this program, and therefore you stand to lose that money. The information that’s provided can quickly get out of date because things evolve and change so rapidly online. We still can’t determine why they charge a recurring monthly fee to stay on with them.

Mobile Money Machines doesn’t get our approval rating, as they just don’t bring enough to the table to make it worth paying a monthly fee to stay on as a member. We also don’t like the idea of putting up real cash in order to test out their theories and strategies. There are plenty of other money making systems out there that let you use your time and effort in lieu of start up capital, and these are the ones we recommend using when starting off trying to make money online.

The reason you don’t want to get into the habit of spending money to try these programs out is that you are tying up that money which could be used to buy other programs or try other methods. By spending money to use something like Mobile Money Machines, you are going all-in with it, and if it doesn’t work you have to start from scratch. Try another system that promises to make money without spending money, and after it proves itself to you, you can invest in it and scale your operations, either through outsourcing or buying tools to help you with the mundane tasks.

Our Recommendation
There are other mobile making money programs out there that have just as much information, if not more, and do not require a monthly fee to stay on with them. There are several reasons that we don’t recommend going with a monthly fee. The firs is that there is rarely enough new information or new features added each month to justify staying on. And most times what they’ll do is try to make it so that you’re business is intrinsically tied into using their system, so you’re almost forced to stay on or you risk losing any progress you’ve made.

What do you think? Does Mobile Money Machines work or not?

← Previous Can Net Space Profits 3.0 Really Make You Money?
⚅ back to blog
Next →Does the Millionaire Society Traffic System Really Work?