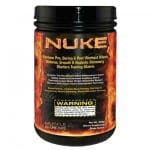 Not many companies have gone as far as waging war against your body, but the makers of Muscle Warfare have done just that. With clever names like Nuke and Napalm, this is like your typical weight gaining supplements gone bad. Or good, depending on how you look at it.

Overview
Most people in the bodybuilding world will supplement in some form or another. In fact, there’s an entire bodybuilding competition that is just for those who don’t supplement. But for most, it just makes sense to give yourself that added boost so that you don’t waste time in the gym, and so you get the most bang for your buck.

While many people will just take a whey protein supplement and call it a day, others will stack up different products to create a synergistic effect in their body. That’s the kind of thing that’s going on with Muscle Warfare.

The Claim
There are many claims made by the makers of Muscle Warfare. They say it is the first time a company has ever come up with a product that is creatine free, as well as being enhanced with NMDA. They say that you will become a “warrior” by using their stack. They also say that because they combine multiple products into one, that their prices are affordable.

One of the claims is not so much what their product has, but what it lacks. Not only does it have no creatine, they’ve also removed any fillers such as artificial dyes and colorings. If you take their product they say that you will experience extraordinary gains. This is a rather vague claim and will mean different things to different people.

The Hype
Muscle Warfare likens its effects to using steroids. This is just one example of their controversial approach to muscle gain supplements. Their entire business model relies on being a little bit edgy, in order to attract their target market.

The Cost
Hitting the $70 price point for many of their products, Muscle Warfare is not trying to price compete with other brands, but really setting their own agenda on cost. Although they say it is affordable because it’s a one-stop solution and the only supplementation you will need, since it’s what’s known as a stack, performing multiple functions with one product.

The Commitment
Even though it’s in fine print, it is still pretty clear what is required of you in addition to taking the Muscle Warfare supplements. You must couple these products with intense weightlifting routines. This might take you out of your comfort zone if you’re used to doing high repetitions at lower weights, or if you’re just starting out in the world of bodybuilding.

You’re also required to consume a high protein diet in addition to taking Muscle Warfare. Many people might assume that since you’re taking such a powerful supplement you don’t have to worry about what you’re eating. But for best results you should be large amounts of protein from natural sources like chicken, fish, and beef.

Evaluation
We like that they have an entire section covering Research and Development. This is not something typically seen on the official pages of nutritional supplement companies. However, most of this research consists of users using their product to determine the results they get, rather than researching the ingredients to make sure they’re safe before administering it to humans.

As far as development goes, it’s not surprising that the makers of Muscle Warfare will always be coming out with new products that have special enhancements on their predecessors. It’s just how the industry works. You can’t rest on your laurels, or some new upstart will come by and knock you out of your place.

We also like that they provide training videos so that you know how to get the best results from using the supplements. Many other companies that provide weight gaining products do not give any examples of the kinds of workouts users should complete in order to bulk up. Some of these exercises are rather extreme, but they give a proper disclaimer at the top of the site so that people know that they should be careful.

Of their flagship products, Napalm gets the best reviews. Perhaps this is because it has so many aspects to it. It’s designed to be taken before your workout, and is said to increase energy, give you more power for your lifting, pump up your muscles, and give you more speed and endurance. With so many things it does it’s no wonder that the majority of people that use it say they experience results.

Muscle Warfare is not for the faint of heart. It is extreme supplementation for those that like to take their workouts to the next level. It is not simply a whey protein, and for the average individual is not recommended, as there are plenty of other products suited for moderate workouts. It would be a waste to spend all that money on Muscle Warfare products and not push your body to new limits.

Our Recommendation
If you’ve reached a plateau in your training, and you’ve always wanted to be a musclebound guy or gal, Muscle Warfare can take you to the next level. We recommend it to those who have an aggressive training regimen and want to be rewarded as much as possible for their efforts in the gym. We also recommend using caution when performing the exercises shown at their website, as some of the movements can be awkward and downright dangerous for inexperienced athletes.

What do you think? Does Muscle Warfare work or not?