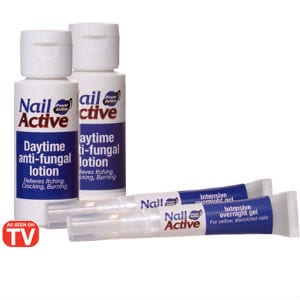 Nail Active says that it can both improve the appearance of your toenails, while at the same time help to make them healthier by treating the underlying problem. So how well does it really work?

Overview
Most of the time when it comes to toenail fungus there are two types of products. You can either buy ones that will simply make your nails look better, or you can get ones that treat the fungus using anti-fungal medication, either prescription or over-the-counter.

The Claim
The main draw to using Nail Active is that you’ll be getting the best of both worlds. It’s going to make sure that your nails start showing improvement from the first day you start using it, while at the same time it keeps the long-term in mind and makes sure that your fungus goes away as well. They say the product is guaranteed to work in just 30 days, so you won’t be treating it indefinitely and you should start seeing signs of success in a relatively short period of time.

The Hype
There is actually an infomercial for this product that provides the hype, and this is one of the few anti-fungal nail products we’ve seen that actually as an As Seen on TV style commercial to it. Aside from the hype though, it is pretty remarkable that no other product has come around that is quite like it in regards to having multiple phases that treats both aspects of the problem at hand.

The Cost
Your order total comes to $40 and includes two sets of Nail Active, with both phases. At first this seems like a strange product to run a buy one get one free promo on, since you’d have to find someone else that needs it as well, but since there is the possibility of a resurgence, and because it may take longer than just one supply to treat it, it’s good to have a backup just in case.

The Commitment
No matter how you cut it you’re going to have to be diligent if you expect your nail fungus problem to go away. It’s an insidious problem because it will linger on if you don’t treat it until it’s all the way gone. The biggest problem that most people have is that they stop treating it too soon and it starts to come back. Just because you start to see good results doesn’t mean you should stop treating it. Keep going until you know it’s gone for good

Evaluation
The interesting thing about Nail Active is that they haven’t only thought of a smart way to fix the problem, they’ve also made it easy. Many toenail treatments are messy, and require several steps. The way this works is you simply apply it before bedtime and it works while you’re sleeping, without messing up your sheets.

All that’s required in order to see the value of Nail Active is to browse competing products. There are some that only work on the surface, which don’t penetrate the nails and flat out don’t do anything to treat the fungus. Then there are those that only treat the fungus and take forever to show any signs of improvement to the nails you already have. Toenails grow more slowly than fingernails, so it’s like watching the grass grow. Too long!

No matter how well-conceived a product is, if it doesn’t stand up to real world trials it’s useless. What we’re seeing here is that many that have tried it are saying that it is indeed effective. Some say that it did take longer than the promised 30 days, but that they did get enough results to stick with it longer and it went away completely eventually. Others said they liked the fact that it was making their nails look better in the short term, and that they could also see that it was fixing the actual fungus problem that was causing the situation in the first place.

Nail Active is getting our Thumbs Up rating, based on its solid positive feedback from users, and it’s dual approach to tackling a common problem. There aren’t too many products out there that combine this into one package, and you’d end up buying two different items to get the same sort of results. It’s nice that they’ve put them together, and that they’ve come up with a good application process so that it’s no muss, no fuss. You can apply it and then go to bed and you don’t have to worry about it.

Our Recommendation
This is definitely worth trying out. At the $40 price point it may be a little pricey, but considering that you’re getting a double supply, that the product is guaranteed to work in 30 days, and that you’re getting results faster than you would with other products, it justifies it.

What do you think? Does Nail Active work or not?