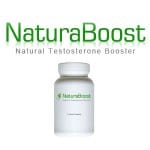 Getting old is hard to do, for both men and women, but the makers of NaturaBoost are hoping to help the guys out there cope a little better. The theory is that as men age, their testosterone levels steadily decline. This results in decreased libido, shrinking muscle mass, heart problems, and other things often associated with old age, like memory loss and decreased mental functioning.

But is testosterone therapy all it’s cracked up to be, or is NaturaBoost just another fad in the health industry that is targeting baby boomer men with cash to burn.

Overview
The promises and premise of NaturaBoost is so grand that it immediately invokes the “if it’s too good to be true it probably is” adage. Any man that reminisces about the good old days of sexual stamina, non-stop horniness, physical fitness, and clear thinking will no doubt be very interested in trying out NaturaBoost just to see if it lives up to even half of its expectations.

However, this is one of those risky products that you’ll never get a real handle on until you take the plunge and pop a pill yourself. When talking about hormones and health, don’t believe any site or person that guarantees that a product of this nature will work for you. There’s just no telling that the ingredients will have the same or similar effect for each man that tries it. Since no documentation or scientific explanation is given, the visitor is left to either take it at face value, or move on.

The Many Claims
There are so many claims made by the manufacturers of NaturaBoost, you’d think that they were selling miracles in a bottle. The one that is most heavily driven home are all of the sexual benefits you’ll experience when you’re on the NaturaBoost treatment.

Their testimonials page lists guy after guy reporting that they have increased size, stamina, as well as enhanced orgasms. They directly state that you’ll be more potent in the bedroom, and be able to have sex more frequently. If your labido has been on the decline, they also claim that you’ll have a stronger sex drive, and have a more pronounced interest in sex in general.

As a side benefit, they also claim that you’ll have an increase in muscle tone, and have more strength to lift weights in the gym, as well as bigger muscle size in general.

Further health benefits claimed are that your LDL levels – that’s the bad cholesterol that gets so much press – will be lowered, thereby reducing your risk of things like strokes and heart attacks. They further state that your heart will be protected against diseases of the arteries and heart.

The claim train continues with promises of having increased energy when using NaturaBoost. You can also expect more stamina and endurance when playing sports, or just getting through your day. You’ll also see an improvement in your ability to concentrate and focus on the task at hand, instead of losing time to the dreaded monkey brain syndrome.

They also make some claims that are harder to prove, such as an increase in memory function, and an overall good feeling instead of having mood swings or getting angry or depressed.

They wrap up their claims by stating that their products are clinically tested as well as recommended by doctors. They further state that there haven’t been any side effects reported, and assert that this means you can use their products without worrying about any adverse reactions.

The Hype
There are a few sneaky things that are used at the NaturaBoost website and sales pages that are somewhat misleading. They try to make it appear that they have been on TV, by putting an As Seen on TV logo at the top of the site. However, it is unclear in what context they were on the television, and how many times a promo was run. We were unable to find any proof that they had ever been seen on TV.

Another point of interest is that they show the logos of CNN, WebMD, USA Today, and The New York Times at the bottom of the page. At first glance it may appear that the product has been featured on these trusted websites and news companies, but if you look closer they are just saying that they have advertised on these sites via the Google Ad Network. There isn’t much skill involved in purchasing these ads, in fact a total newbie can order ads on these sites with just a few dollars, and in a few minutes.

They also have a chintzy image of a trophy stating that their product is award winning, but clicking the image takes you to their order page, with no mention of what award they are speaking of. They also state that they have been seen in Natural Health Magazine, but this is most definitely through advertising, and not through a featured article. It’s just another weak attempt at building unconscious credibility in the visitor.

They also show what is obviously a stock picture of a smiling doctor, with a quotation stating that there is a 98% success rate and that you don’t have to live with low testosterone any more. This doctor most assuredly did not say this, and it is likely that no doctor said this at all. But it gives the appearance that he did, and is just another example of false credibility building.

So don’t let them hype themselves up. At this point they seem like a small upstart company that is selling a product that is designed to alter your male hormones. This is nothing to take lightly, and in our opinion they shouldn’t be trying to dupe people into false beliefs.

The Cost
At $80 for a three-month supply, NaturaBoost is almost suspiciously cheap. This comes down to less than a dollar a day for the treatment. For something that is claiming to solve most of man’s problems, this seems like a bargain indeed. Since they rightfully say that each man will respond differently, they offer 3, 6, and 12 month packages as well as a 6 month money back guarantee so you can take your time evaluating it.

The Commitment
You have to be committed to taking one pill twice daily for as long as you want to experience the results that you get from taking it. Other than that you don’t have to change your lifestyle, although to take advantage of the muscle mass claim you’ll probably want to get back into a weight-lifting routine, although it is not a requirement.

Evaluation
There are two different products that are on offer from NaturaBoost. The ingestible pills, as well as an underarm spray that is supposed to provide instant benefits. Each product doesn’t have much of a detailed description as to what sort of natural ingredients are being used, or why these ingredients are able to do what they do.

Any further evaluation is impossible, as individual results will vary. No amount of positive or negative reviews would make any difference as to whether or not you should try it.

This is a relatively new product, but all signs are pointing to it not working. First and foremost, there is very little scientific data to support any of the claims made by the company. The benefits they list may be the ones experienced by men that undergo hormone therapy from a professional, but there is little proof that this small company has managed to manufacture a pill that produces these same results and offer it for sale at such a discounted price.

Our Recommendation
With a claimed success rate of 98% and a 180 day guarantee in place, there’s only so much risk involved in at least trying it out. For many men, this covers all of the bases for the things that seem to decline with age, such as physical strength, sexual prowess, and mental clarity. If one product can knock all of that out and make you healthier all over, it is worth $80 to find out.

However, there is no reason to believe that this product works, since there is zero feedback in the form of third party reviews, and it is a relatively new product on the market. So you might not want to risk your health and well-being by ingesting a product that has no verifiable data supporting their many claims.

What do you think? Does NaturaBoost work or not?

← Previous Does Nioxin Really Work
⚅ back to blog
Next →Is Flex Seal What You Need For DIY Home Repairs And Fixes?