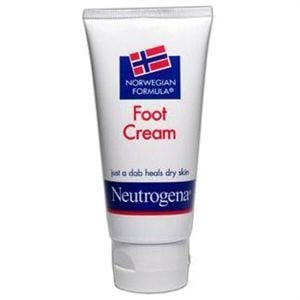 Neutrogena Foot Cream is getting pretty good reviews from users, but how well does it really improve the skin on your feet? Feet are one of the most neglected of all body parts, and are known to take a beating. It’s a good idea to take care of them regularly so they don’t act up on you. Is this product something that you can keep around as your go-to foot cream, or are there better options for the same price?

Overview
If you’ve ever tried using ordinary moisturizing lotions or creams on your feet, you’ve surely noticed that they need a special type of ingredient in order to be effective. Most products made for the hands or body will be too greasy for the feet, and won’t be able to be absorbed by the tough calluses or rough spots. That’s why there is a healthy market for specialized creams that contain ingredients like shea butter that are more easily absorbed, and have longer lasting effects.

The Claim
Neutrogena Foot Cream says that it has been tested by dermatologists, and can work up to 17 hours to keep your feet smooth and soft. They also say that it is a concentrated formula, and contains glycerin which is where it gets most of its effectiveness from.

Proper Foot Care
Your hands get a lot of attention because they’re always in plain sight, and so if there’s a problem like dryness you tend right to it. But feet are usually out of our field of vision, and only get the cursory glance if they start giving us problems. To properly care for your feet you should set up a weekly session in which you use a foot file to take down any rough spots that have formed, or to soften up any calluses, and then give a good dose of a well-rated foot cream to cap it all off.

The Cost
Neutrogena Foot Cream is selling on Amazon right now for $15, which gets you a four pack, so less than four dollars a tube, which isn’t bad compared to many of your other options.

The Commitment
You have to stay committed to caring for your feet on a regular basis. The best way to do this is to add them to your nightly getting ready for bed routine. Many of the creams for the feet are great to put on right before bed because then you can soak in while you sleep and you can wake up with a fresh pair of tootsies in the morning. While it may seem like a hassle at first. If you can stick with it for 21 days, they say that’s how long takes to form a habit, and after that it would just seem like second nature.

Evaluation
Neutrogena Foot Cream gets incredibly solid reviews, with most people saying that it works and works well, with a few caveats. They say that it will make your feet slippery because it doesn’t soak in as well as some other creams and lotions do. And while most praise its scent, some say that it is too strong, so you’ll smell it lingering on and be reminded about your foot cream session again and again.

There are a few dissenters out there, and they point out that it’s not very good for cracked feet, so if you need to use this on more severe problems like very rough patches, or hardened callouses you might want to go with something like Heeltastic, which specifically is for these conditions, or Miracle Foot Repair Repair Cream, which works on the overall foot, including the rough stuff.

The Neutrogena Name
Neutrogena has a reputation for being one of the pricier brands you can find on store shelves, but they are also known for high quality moisturizing lotions and creams, and for justifying the price. Many of their hand creams seem like they’re overpriced when you see them on the shelf next to generic or lower-priced creams, and you have to wonder if there really is something special in them that makes them worth it, or if they’re just capitalizing on fancy packaging. But statistically speaking, the reviews that they get for most of their products shows that they’re not just a pretty face.

Neutrogena Foot Cream is getting our nod of approval, and most others agree with us. It’s not too surprising that they were able to get this right, they have several decades in the moisturizing game, and they’ve done a pretty good job of perfecting their craft.

Our Recommendation
This is a good foot cream to have as a standby for whenever your feet need it, or as part of a nightly regiment of proper foot maintenance. The price is pretty good, since Neutrogena is known for charging a lot of their moisturizing creams, especially the concentrated ones.

What do you think? Does Neutrogena Foot Cream work or not?