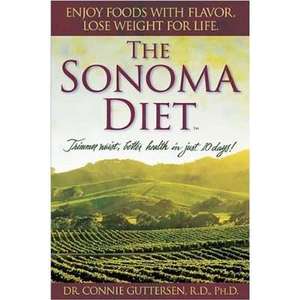 The New Sonoma Diet started off as a book and is gaining in popularity as a diet that is easy to follow, yet yields impressive results. Based on the lifestyles of Mediterranean and Napa Valley living, this doesn’t look like your typical gimmicky diet you see advertised on TV. But how does it actually work?

Overview
Typically, diets use one or several gimmicks to try to get the number of calories you take in to be lower than the number of calories you use up. By creating this deficit, you lose weight. But the hard part is keeping people on something that does this, because it usually means eating less food, getting more exercise, and eating foods that you wouldn’t eat if you weren’t on a diet. The Sonoma method seems to try to turn that around by focusing on foods that you will actually enjoy eating, and not really resembling a diet the way we usually think of them.

The Claim
New Sonoma Diet says that you can get a trimmer waist and have more energy in just 10 days of being on it. They say that they have eliminated calorie counting, and can show you ways to save time in the kitchen by cooking once and eating twice from your efforts. They also claim that they will show you what to get at the grocery store, and what to order when you’re at a restaurant or on the go, both times when people falter from their diet plans.

The Hype
The hype is that this is a diet and most people have tried one, two, or quite a few in their lifetime. It can be hard to start again with something new, because you’ve heard all of the same promises before. But it’s good to keep an open mind, and have an optimistic outlook no matter how many times you’ve tried and it didn’t work out.

The Cost
You can get a copy of The New Sonoma Diet by Dr. Connie Guttersen for less than $14 at Amazon. It’s got very good reviews for a diet book, with most people saying that they enjoy the recipes, and that the reasoning is sound on the “whys” of how it works. What’s nice is that they don’t have a line of pre-packaged foods that they’re trying to push on you. You get to grocery shop and buy the food that you need in order to follow this program.

The Commitment
You have to be committed to this diet, the same as you would with any lifestyle change. But it shouldn’t be a matter of pure will power, the way you have to summon superhuman effort to stay on with most diets out there. This should just be a matter of making subtle changes to the foods you already like to eat. You also won’t have to draw attention to yourself at restaurants, family gatherings, or other social events. The stigma of being on a diet is actually a big diet killer as well, so don’t underestimate the feature of being able to fit in.

Evaluation
The New Sonoma Diet looks a lot like a Mediterranean diet. You definitely won’t be wishing you could eat tastier foods, because what you’re authorized to have can be pretty delicious. If you’ve always wanted to eat Mediterranean, but didn’t know exactly how to do it, this system can help by showing you the recipes and the different food and wine pairings so that you can truly live the way you’ve always wanted to, without any guesswork.

Not Really a Diet
Even though it has the name diet in the title, there’s not really much of what you’d typically find in a diet program. It really just explains a specific way of living. If this way of living is different from the one you currently have, it may seem like you’re dieting. At least a while. But over a period of about 30 days you’ll notice that the old way of doing things doesn’t make as much sense as this new way, and you’ll be hooked. If nothing else you’ll have a new way of looking at food, and you’ll be able to make more healthy decisions going forward.

The New Sonoma Diet is more like a lifestyle that you’d want to adopt. If you can get into the coastal California way of living and thinking about food then you should be able to have a healthier body no matter where you’re located. We’d recommend getting some light exercise while you’re on this, as part of your new lifestyle. It could be as simple as taking a relaxing stroll after dinner. Anything that gets you moving and feeling good is a nice complement to healthy eating and positive thinking.

Our Recommendation
We always like to see diets that you could stick with for the rest of your life. This is something that you would never have to step down from, or wean yourself off. It’s not extreme in the sense that you aren’t taking extreme measures like reducing your calories to a bizarre amount, or only eating foods with no carbs. This is something that puts the body into a natural state of weight loss, and could also help prevent a lot of diseases because the focus is on wholesome foods shown to have many different benefits.

What do you think? Does the New Sonoma Diet work or not?

Customer Review on “Does the New Sonoma Diet Really Work?”