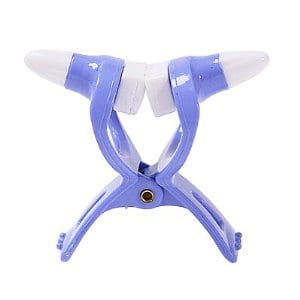 The Nose Huggie looks like an oversized clothespin, and it’s designed to help you reduce the size and change the shape of your nose without having to resort to a nose job.

Nose clips like these started getting popular in Japan, and the idea is that the cartilage in the nose allows it to be malleable, and consistent sustained pressure will force it to yield to the shape you want. But specifically, does Nose Huggie work?

Overview
Many people are unhappy with the look of their nose. Either it’s too big, or it’s off-centered, or there’s a bump on it. Whatever the case, there are definitely millions of people that would be willing to try something that doesn’t hurt and doesn’t require surgery in order to work. Before these nose clips came out, there wasn’t really any other alternative, you either had to learn to love your nose or see a plastic surgeon.

The Claim
Nose Huggie states that by applying it to the part of your nose that you want to change for just 15 minutes a day, you can see results in a few weeks.

The Hype
There is always hype behind products that allow you to avoid surgery. Faced with the option of getting a nose job from a plastic surgeon, or holding a clamp on your nose for 15 minutes a day, most poeple will opt for the clamp. If it were true that you could get the same results of a surgery costing thousands of dollars for something as inexpensive as Nose Huggie, people would be lining up to buy it.

The Cost
It’s $18.90 including shipping for your Nose Huggie. This is just $2 more than their competition.

The Commitment
You simply need to clamp the device to the part of your nose that you want to change. It will put constant pressure on the area for as long as you wear it, and the recommendation is that you should wear it for 15 minutes per day for two weeks, and then one week more in order to help the results stay.

Evaluation
No research and development seems to have gone into the creation of the Nose Huggie. They have someone dressed as a doctor that remains unidentified throughout his pitch, and is most likely not a doctor. The product seems to have ripped off another very similar product called Nose Right.

The following video evaluation was definitely bought and paid for by the makers of Nose Huggie, and there is no way in the world that the guy in this video actually has a Nose Huggie, or used it in any way shape or form. Have a look:

Real opinions are mixed, but you have to take into consideration that feedback can be easily manipulated by companies, and it’s hard to get an accurate read on what the consensus is. Most people that use a product like this aren’t willing to admit that they had a problem with their nose. They are reluctant to put their name next to their review, and fess up to the fact that they had work done to their nose.

However, those that aren’t happy with the product are willing to voice their displeasure, because they don’t have anything to lose since it didn’t work for them, they’re still in the same boat they were in before they tried it.

We’re giving this one the thumbs down. Nose Huggie is indisputably a knock off of Nose Right, which hit the market first, sells for less, and ships worldwide. Both products look almost identical, so it’s unclear which one would work and which one wouldn’t. Their website is a little more flash than their competition, and their promos look like they spent more on them, but this would make sense since they didn’t spend any time manufacturing a new product, but rather just took the design and concept outright.

Our Recommendation
You can safely avoid the Nose Huggie, and if you’re bent on trying out this sort of system on your nose, you can buy the Nose Right from their official site for less than you pay for the Nose Huggie. In our opinion it’s probably likely that neither system provides permanent results, and both are best avoided.

What do you think? Does Nose Huggie work or not?

← Previous Does Your Baby Can Read Really Work?
⚅ back to blog
Next →Does Google Adwords Really Work?