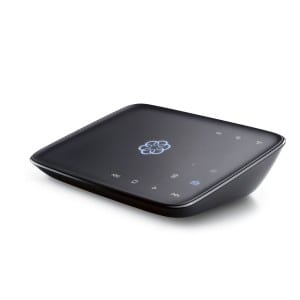 Ooma Telo bills itself as the free way to get home phone service. It uses your high speed internet connection, but allows you to use a real phone, and doesn’t involve using your computer. Seems like it would be a pretty good deal, pay a larger amount up front but then never have to see a phone bill again, and be able to make clear calls whenever you want. They’ve got our attention, so let’s see if this makes sense on paper.

Overview
Most people know that you can make phone calls from your computer either free or cheap with things like Skype and Gmail, but usually the call quality leaves something to be desired, and the old adage of getting what you pay for is apt. But that doesn’t mean that VoIP is useless, and lots of people find success with services like Vonage which also takes advantage of your high speed connection. When things eventually go fiber optic, no one will be using a traditional phone any more. Until then, by equipping your home with a high speed Internet connection, you’ve opened the doors to lots of things, like wifi, and cheap or free phone service.

The Claim
Ooma Telo gives you free calls within the United States, and cheap rates everywhere else. These companies can do that because the cable and phone companies have already laid the infrastructure and done all the heavy lifting. Their model is set up quite differently than their competitors. Other providers will give you the unit for free, and then collect a monthly free from you. This is sort of like buying yourself out of a monthly service, but still enjoying the service for as long as you want.

The Hype
The hype comes from so many people still paying high phone bills. It’s the new millenium, but some people have until recently been paying for a traditional landline in their home. That’s at least 5 years outdated, and most people have either switched to cell phones entirely, or have used some form of VoIP on their computer, or they get their phone service through the cable company in a bundle package with their Internet and cable television. Sometime in the near future phone calls from the computer should be just as good as a traditional phone, but until then people are still in search of the best quality phone call out there.

The Cost
Ooma Telo is $180 on Amazon. Depending on what your monthly phone bill is, this will be able to be made up in a few months or maybe a year’s time. Whatever it is, it’s a one time charge because there’s no monthly charge unless you decide to upgrade. If you do that it’s $10 a month and gets you a bunch of extra features, one cool one is the instant second line which allows you to make two calls at the same time. The upgrade is not needed if you just want basic phone service, you get that indefinitely when you purchase the unit.

The Commitment
Once you buy it, it’s yours, no more monthly commitment. It’s easy to install, and you don’t have to involve your computer in the process because it installs through the modem and with your actual phone. Most people report loving the idea of not paying a phone bill any more, and that novelty alone might be worth it. But if you run the numbers over the last year and figure out how much you specifically spent on your phone bill, including all of the taxes and fees, you’re probably on the verge of getting this right now.

Evaluation
Ooma Telo is a winner, so says the scores of people that have rated it highly and would recommend it. It’s one of the best reviewed pieces of electronic gadgetry that we’ve ever seen. One interesting thing that we noted is that those that have been using it for a while now have said that they are continually working at improving the service. That speaks volumes for the kind of company it is. Most companies will hit one homerun and then sit back and let themselves get patted on the back. When it comes to technology though you’ve got to always be trying to get better and better to stay competitive.

Ooma Telo gets the coveted Thumbs Up review from us. It’s basically taking a solid idea – no phone bill – and delivering on the promise. Definitely put the extra features of the Premium service to the test during the free trial, some of them are great and it’s only $10 a month. And if you don’t like the whole system, just send it back within the first month and no harm no foul. It’s one thing to claim to have crystal clear calls, but they’ve set it up so you can listen for yourself without worrying about making the wrong purchasing decision.

Our Recommendation
We definitely recommend getting this if you had your eye on it. There’s is a 9.7 out of 10 chance that you’ll like it, and that it will be the answer you’ve needed for a high phone bill. You’re already paying a premium to get high speed Internet, you might as well put it to full use by letting it double as your phone service. Plus if you don’t like the company that’s providing your Internet, this is a way to shortchange them out of the monthly phone service they’d probably like to sign you up for.

What do you think? Does Ooma Telo work or not?

← Previous Does Banital Really Work?
⚅ back to blog
Next →Does My PC Backup Work?