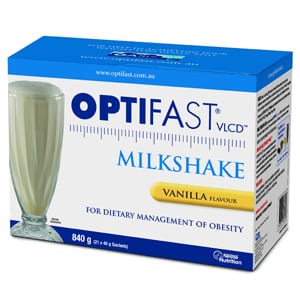 Optifast is a diet that you should only consider if you’re severely overweight and have tried several different options. The reason being is that it is a liquid diet that is meant to give you quick results in a short period of time. So even though it might work in the short term, you could be setting yourself up for trouble later. We investigate further to find out who this diet is for, if anyone.

Overview
Most conventional diets that involve drinking meal replacement shakes, like Slim Fast and others, still have you eating at least one real meal a day. Even those have been criticized for establishing poor eating habits and not having a good exit plan. There’s no reason to view food as the enemy, or take drastic measures like cutting it out of your life entirely. There are plenty of health concerns that arise from not eating real food, most prevalently malnutrition by not getting a varied enough diet.

The Claim
The Optifast weight loss plan involves drinking their branded shakes and consuming their other products that you can only get by joining their program. They claim that you’ll be able to lose over 50 pounds, because that is how much the average person loses on the program. They say that they’ve been doing this for 30 years now, and that the results are clinically proven. They say it’s safe because it is medically supervised, so it’s not as if you are just going it alone.

The Hype
The hype comes from so many obese people testifying that they lost weight on this program. When you have a lot of weight to lose, and are typically eating thousands of calories a day and suddenly switch to drinking shakes only, you are going to lose weight, no question about it. So it’s not really a magical way to lose weight, and you should really do your research as to whether this is a healthy way to go about it by asking your doctor if they think is a good idea, and if they don’t, asking what they do recommend.

The Cost
Programs like Optifast always like to say that their prices vary by location, but they could at least give some sort of ballpark figure as to how much this is going to cost you. Of course it will vary by how long you stay on it, and how many meals you replace per day. Some users say that they are able to get their health insurance to cover a portion of the costs, but still end up paying several hundred dollars to get started and maintain it.

The Commitment
Even though this is meant for short-term weight loss, you are still going to have to stay committed to drinking their shakes and not cheating on the program once you are on it. And since they say that the typical user is on this for 26 weeks, it’s not really that short term. Your final commitment will come when you try to wean your way back to a more natural way of eating. This can be a huge stumbling block, and can negate all the progress you’ve made if you regress to your old ways and gain all your weight back.

Evaluation
Optifast seems to be covering a lot of the concerns people would have about going on a diet like this, including what to do when the diet finishes, and how to stay on it without failing. They said that it typically lasts 26 weeks, or about six months or so. That’s a long time to go without eating a real meal. Of course, it is in their best interest to prolong it for as long as possible so that you end up buying more of their product, so there’s actually a conflict of interest regarding how long this should take.

They say that you’ll get personalized attention along the way, and that they will help by teaching you how to make better choices regarding food, and also on how to get more active. They make the case that you are better off going with them than if you don’t, and they say that half the people that completed the program were able to keep the weight off five years later. If you are very overweight you definitely have to do something, and you can’t sit idly by hoping that the situation will change without any action on your part. However, you have to weigh your different options and go with the best one.

You could look at Optifast a few different ways. The first is that it is a thinly disguised way of trying to sell their weight-loss shakes and other products. Or you could look at it as a company that is genuinely trying to help severely overweight people see results quickly and change their lifestyles. It’s all relative to the observer, so we will let you make up your own mind as far as that goes.

Our Recommendation
They’ve got a BMI calculator on their website that will give you a better idea of whether this is a diet you should consider. They are honest about whether or not you are a good candidate for the program and if you are not overweight enough they will not recommend going with them. If you do qualify as severely overweight or obese, this may be an option for you but you should consult your doctor first before starting up with them.

What do you think? Does Optifast work or not?