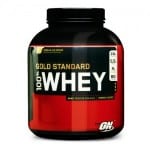 Muscle gaining supplements are very popular in the bodybuilding community and one staple is Optimum Whey Protein. You can’t miss it because it comes in big black tubs with big block letters saying ‘whey protein’. But just because it’s ubiquitous doesn’t mean it works, or does it?

Overview
If you’ve ever set foot inside a GNC you’ve no doubt seen the giant tubs of Optimum Whey Protein lined up on their own shelf. It makes you wonder if it is GNC that makes it, but they don’t. It’s just a big seller. We all know that just because a product moves off the shelves doesn’t necessarily mean it works. But the Optimum brand has been around for a long time now, so they’ve got to be doing something right.

The Claim
The claim of all whey proteins in general is that they help the body make new muscle by filling in the amino acid gaps left by a normal diet. Optimum Nutrition, the makers of it, have a pretty straightforward website and don’t make a lot of outlandish claims like build “10lbs of muscle in one week!”. They do show a lot of bodybuilders next to their products, which might make visitors think that they got these amazing bodies by using their whey protein, but it isn’t outwardly claimed by the company.

The Hype
The hype is the theory that the average person needs to supplement their workouts at all. There are basically two sides on this. One side says that working out without supplementing your efforts is a waste of time, while the other side says that unless you’re a professional athlete or bodybuilder you have no reason to be taking any supplements.

Both sides of the coin make sense, which is why it’s so confusing trying to decide whether to take anything or not, and if so, which products to take. Optimum whey protein seems like a good choice because it’s available at many of the major health food stores, and it has been for well over a decade.

The Cost
Many people say that Optimum whey protein is a good price per serving. This is because in the world of muscle supplementation the prices can get pretty outrageous. It’s clocking in at around $45 for a 2 pound tub of the stuff. This can last one month or two, depending on how many servings you take each day.

The Commitment
There are many different opinions on how you use whey protein in conjunction with a workout program or exercise routine. Some gurus say you should take it before a workout, some say after. For example, Tim Ferriss in his book The Four Hour Body says that you should take it about 30 minutes before a workout so it has time to get into your body and hits your bloodstream just when you are starting your workout. Bill Phillips from Body for Life recommends taking it soon after your workout, within 20 minutes as a way to recover.

Still others advocate its use as a meal replacement so that you can have 5-6 meals per day without having to make five or six different meals. Whichever way you decide to use whey protein you have to commit to using it religiously if you want to experience the full benefits.

Evaluation
The only thing that is missing from Optimum Whey Protein is that they are a little lax on how much information they provide to back up some of their newly created substances. It’s great that they keep improving their formula, but it would be nice to see more of the science behind it, and there’s also something to be said about leaving well enough alone.

A review of Optimum Whey Protein from an actual user:

Yes, it works as a high-quality whey protein. Whether or not it provides bigger or stronger muscles on any individual will be purely subjective. Some people respond to supplements, while others don’t. Some people have body types that won’t build muscle no matter what they add to their bodies, except steroids. Other people have body types that can easily build muscles with just a few tweaks to their diet and some mild supplementing.

Still other people will say that they have tried a product like this and say it doens’t work. But it could be that they did not take it at the right times, or they did not perform the right exercises to get any benefits from it. And there are still others that will use Optimum Whey Protein in conjunction with several other products and say that it works when in fact there is no way to say with any certainty that it was the whey that did it and not another more concentrated product.

Our Recommendation
If you believe in whey protein and supplementing your workouts, then Optimum Whey Protein is a solid buy. It’s a trusted brand, and has stood the test of time. It is not the same product it was a decade ago, because they keep improving upon themselves.

We recommend going with the all natural variety, produced by the same company but without all of the synthetic substances used to make it taste better. From directly trying this out, I can attest to the fact that the taste is similar to the original, but by being all natural it’s somewhat better for your body. I tested chocolate in both the original and all-natural with only a small amount of taste difference noted.

A Personal Note from Tanner Jackman
For many years I was a believer that if I was doing weight lifting or strength training in the gym I needed to be taking some sort of supplement, or eating large amounts of protein to see any muscle gain. The whole time I had a sinking suspicion that the entire industry was a sham, and the things I were ingesting probably were doing very little to help me, and could possibly even be hurting me.

I switched from Optimum Whey Protein to the Natural Optimum Whey Protein and used this nearly every day as a meal substitute, and also either before or after a workout. While I was able to build pretty good sized muscles, I never did a control test where I would work out without taking a supplement, so I had nothing to compare it to.

I’ve been working out for a month now with no supplementation at all, and following a vegetarian diet, and I can say that I not only feel better, but have been able to regain a muscular physique after not being in a gym for four straight months.

What do you think? Does Optimum Whey Protein work or not?

← Previous Does Great Hair Day Really Work?
⚅ back to blog
Next →Does Paint It Black Tanning Lotion Really Work?