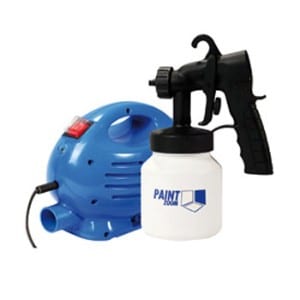 Paint Zoom promises to make your next painting project a breeze by giving you a tool that is similar to the ones that the pros use. But can something at this price point really provide those kinds of results, and is it constructed in a way that will stand up to repeated use? We took a closer look at this supposed painting marvel and are here to report our findings on whether or not it really works.

Overview
The reason painting is widely considered to be a task most of us don’t want to attempt is because there’s just not a lot of fun to it. The only thing more boring than putting the paint on the wall is watching it dry. It’s only natural that an industry has been built around making the process less of a hassle. Between getting paint all over the place, and the tedious nature of the job, it’s nice to think of just spraying the paint onto the wall with a sprayer, and getting on with your life.

The Claim
Paint Zoom claims that it turns any project into a piece of cake, and that you can paint like a pro with it. All of the examples they show in their commercial make it look amazing. They show people effortlessly painting things like walls, awnings, fences, overhangs, tables, anything and everything you could imagine painting.

They say that with it’s one-touch functionality, you don’t have to worry about spending a ton of time learning how to use it, you can get started right away. They also say that they’ve built technology into it that lets you go over things one to give it one coat. They say you won’t need rollers, paint trays or brushes, because this does the job of all of them. It’s also light, so you can use it for a long time without tiring out, and you can move it around to where you need it.

But they also say that it’s strong, and that it is the kind of quality that they use in professional painting companies, and on commercial projects. With the way it works you can get into tight spots and angles that are really tricky with a brush, and impossible with a roller. They also say claim that the head of the unit won’t drop paint all over, so cleanup is easier.

The Cost
Paint Zoom is reasonably priced, which is probably the reason so many people have tried it out. Before this, paint sprayers pretty much required a significant investment, and the only people that were buying them were professional painting companies. At $100 they’re trying to make this more affordable for the masses, and put traditional paint brushes and rollers out of business.

The Commitment
This should in theory lower your commitment level on your next painting project, and is basically their number one selling feature. By taking away most of the tools that make a mess, and make painting hard, they are making the project much more agreeable.

Evaluation
You can tell just by looking at it that this unit is made entirely of plastic, which wouldn’t be a bad thing by itself, but the quality of plastic it is made of is very poor, and many people have reported that it overheats rather easily with anything close to extended use. It’s a classic example of a product making bold claims, but not being able to live up to them when put to a real world test. There is just too much evidence that it isn’t working, enough for it to be statistically significant, and not just a few people saying it didn’t work for them.

The general verdict is that the Paint Zoom is one of those As Seen on TV products that you should avoid. It doesn’t do the job as depicted in the infomercial, and it will not stand the test of time. If you have a big project, most people said they couldn’t get it to work long enough to accomplish it. Maybe if you had a series of small projects to do it could work, but for those, users said it would be easier and quicker just to use brushes and rollers.

It’s a flop! Almost everyone that has tried this out has said that it does not work, and that you shouldn’t trust the Paint Zoom commercial you saw on TV. But all is not lost because if you were willing to get a paint sprayer at the $100 price point, you’re in luck.

Our Recommendation
Don’t get Paint Zoom, go with a well-reviewed pain sprayer at a little bit of a higher price point, like the Wagner Control Spray Max for $100. This way you’re getting a brand name that has a good reputation, you’re getting a serious amount of positive peer feedback, and you get the same sort of results that were promised in the ad that started you down this road in the first place.

What do you think? Does Paint Zoom work or not?

← Previous Does Light Relief Really Soothe Aches and Pains?
⚅ back to blog
Next →Does Supple Drink Really Help with Joint Pain?

40 Customer Reviews on “Does Paint Zoom Really Save You Time?”