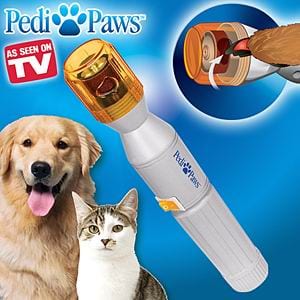 PediPaws is a nail trimmer for dogs and cats that is supposedly safer than using a conventional trimmer. The theory here is that by using an electric filing system, you can file your dogs nails down layer by layer so that you are never in danger of hurting them, and can get rid of the sharp edges that are causing the problems. But can something at this price point really be the solution to trimming your dog’s nails, or is this just going to be another one of those cheaply made products that ends up getting tossed in a junk drawer and forgotten about?

Overview
Dogs nails are sensitive, and over-clipping them can be very painful for the dog. Think about how it feels to clip too far down on your own nail. Then keep in mind that dogs have what’s known as a quick which carries blood to their nail and can start bleeding if you cut too far down. There are plenty of online guides and illustrations that will show you where to cut and where to stop to avoid hurting your dog. It is not very hard to properly cut your dog’s nails if you have the right tool for the job.

The Claim
PediPaws says that it works by taking down your dog’s nails in layers, so it doesn’t go near the quick, and so it doesn’t try to cut through the nail. They show a simulation of what is happening when you try to cut your dog’s nails using clippers or other trimmers and how it might be easy for you to damage the quick. They over-exaggerate just how hard it is to properly clip your dog’s nails, and make it look like you have a very slim chance of cutting their nails without causing a huge problem. Your amount of wiggle room is actually bigger than what they show, you just have to study up on the process so that you don’t make any unnecessary mistakes.

The Hype
The hype comes from their commercial, and how graphic they are with their depiction of what can happen when clipping your dogs nails the wrong way. Even MADtv got in on the action with a spoof of just how bad the cartoon illustration makes it seem. It is a bit of sensationalism geared at scaring owners into taking action and using the product. Cutting deep into the quick would be something that only a very inexperienced person would do.

The Cost
PediPaws is $10, which is suspiciously cheap, and part of this reason is that it runs on ordinary batteries. Having to constantly replace the batteries on this means that a small price actually will double or triple as you use it. It also means that it’s not going to get a lot of juice to be able to power through the thicker nails, which has been one of the top complaints people had about this item.

The Commitment
There is definitely a lot of commitment involved here, especially compared to bringing your dog to the groomer. When compared to other do-it-yourself trimmers and clippers, this will take you longer since you are required to spend enough time on each nail to take it down little by little. Depending on your dog’s personality they may or may not still long enough for you to perform this painstaking task.

Evaluation
There are a few things that they got wrong with PediPaws. First, it’s very loud, and most dogs don’t like being around loud things like that. Secondly, while it may not hurt them, they definitely don’t like when you use it on them. Maybe it doesn’t hurt, but it doesn’t feel great the way they make it seem like it does. Dogs can only tolerate so much, and even the most patient and obedient dog is only a sit there and take for so long before they say nuts to this.

Most humans don’t like the feeling of clipping their own nails, and it’s not like filing our nails feels great either. That sensation of sending chills down your spine is probably amplified for a dog, because their paws and nails have to tell them about the world around them, and are very sensitive. That’s why this product gets an overall fail, because they make it look so hard to clip a dog’s nails, which is misinforming people, and then they make their product seem like it feels great, when in fact it probably doesn’t.

PediPaws just doesn’t offer a good enough experience for your dog for us to give it the go ahead. Perhaps it could work with small breed dogs and smaller nails, but for larger breeds with thicker nails, forget about it. You’ll end up spending more time with this, and your dogs will end up secretly hating you for it. Don’t be scared into thinking that you can’t use a professional grade pair of doggy nail clippers to get the job done. Just study up on how to locate the quick, and then use the same method that the groomers use.

Our Recommendation
Professional grooming is still the best way to get your dog’s nails trimmed, or if you want to avoid that cost and do it on your own you can get something like the Safari line of trimmers. They’re well-reviewed, cheap, sharp, and even give you pointers on how to see where the quick of the nail is so you don’t do any damage.

What do you think? Does PediPaws work or not?

← Previous Does the Turbie Twist Really Work?
⚅ back to blog
Next →Does the Char-Broil Infrared Grill Really Work?