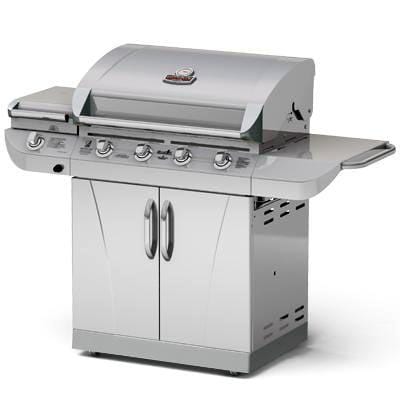 Wondering if you should buy a Char-Broil Infrared Grill? These clock in at a pretty good price point, and promise to add a totally new way of cooking to your repertoire. By using infrared heat to cook your foods, you might notice that the food tastes better, and the grill is easier to use. But is it all legit, or is it just a bunch of hype? We did our best to get to the bottom of this one.

Overview
It seems like there will always be a new way to cook and grill your food, and the Char-Broil company is hoping that they’ve got one here with infrared. Infrared heat is not the same as direct grilling with things like charcoal, or gas. Infrared heat should penetrate the meat more deeply than a flame, cooking it more thoroughly in less time. But a shortened cooking time is one of the few claims that they don’t make about this line of grills, and this means you shouldn’t be so quick to ditch your George Foreman Grill.

The Claim
The makers of the Char-Broil Infrared Grill say that when you cook meat on their grills, it will come out juicier than it would on a normal gas grill. They also say that their grills don’t cause flareups like you get from other grills. They also say that their grills heat evenly throughout, so you don’t have to worry about cooking your foods in just one little spot that cooks them well. This allows you to use the entire surface of the grill, and not just the center areas.

They also say that it has a wide range of cooking temperatures, so you can cook all sorts of foods on it, And you can slow roast big cuts of meat. But this feature is not just good for meats, but vegetables as well. Most grills do not have this feature, and it lets you use it more like an oven because it can maintain a consistent temperature.

They also claim that you can put the grill on a very high heat in order to clean it, because it will burn off all of the residue that’s left behind from the food, and then you simply just scrape it off after it has cooled. They also claim that all of the gunk that is left over from a normal grill that ends up accumulating at the bottom of the grill just doesn’t happen with a Char-Broil Infrared Grill because food bits and ash particles never make it down that far.

The Hype
The hype is that it is using infrared, which has become a buzzword in many different markets as a way to make people believe that it is using some special method or technology. We’ve seen the term kicked around from everything from saunas to countertop cookers.

The Cost
There are many of these grills to choose from, so you have to pick out which one suits your taste and budget. As an example, there is a 4 Burner Char-Broil Infrared Grill that goes for $550, and this would be the sort of grill you’d put on the back deck for summertime grilling.

The Commitment
You need to put just as much time into your foods on this grill than you would on a conventional gas grill, but if you’re using a charcoal grill, it will definitely reduce your cooking time.

Evaluation
The Char-Broil Infrared Grill line-up uses propane just like an ordinary gas grill, but the technology is in how they cook your food. By using infrared heat instead of a direct flame they are basically harnessing the power of the sun in order to cook with. It converts the propane gas into infrared energy and directs that at your food. That’s why you’re able to get a consistent level of heat, and also why you’re able to use the entire grilling surface.

Some of the grills in their collection get mixed reviews, but most of them fare pretty well, and are leaning towards the positive. Overall, the company appears to be producing quality grills for the price, and whether or not you buy into the infrared hoopla, the bottom line is you’re getting value for your money.

A Char-Broil Infrared Grill is likely a good buy, but there are too many dissatisfied users for us to fully back it. We can’t rightfully say that it will work for you. However, most people seem to really love their grill, and say that it’s lasted multiple years. But there are others that complain that it is poorly designed, and doesn’t live up to the claims it makes. There are some people that say that they were skeptical about the infrared technology, but now accept that it works. And there are still others that say it is all a bunch of baloney.

There’s no conclusive way to say if you’ll like it or not because everyone has their own personal history of the kind of grills they’ve used in the past, and what they expect from a grill like this. Some people will think that it’s great, while other people will use the same grill and be disappointed with it. So it really has just as much to do with the user as it does the grill. We recommend going with one of the smaller, lower priced models to see if you like how it cooks the food, and then consider upgrading to a larger size if you think it’s a winner.

Our Recommendation
If the budget allows it, this seems to be a pretty good grill to have because it uses a very healthy and tasty way of cooking. It solves a few problems that are inherent with a normal gas grill, so you are really getting a good upgrade if you already have a propane grill. If you have been using a charcoal grill up until now, this will be a serious step up for you. These are designed to last, so you won’t have to worry about getting your money’s worth, this is a grill you’ll end up having for several years to come.

What do you think? Does the Char-Broil Infrared Grill work or not?

← Previous Does PediPaws Really Work?
⚅ back to blog
Next →Does the OPI Foot File Really Work?

2 Customer Reviews on “Does the Char-Broil Infrared Grill Really Work?”