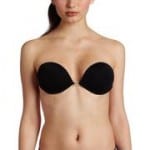 Perks Push Up Bra hopes to be the answer for the bra that goes with the little black dress. In addition to being a push-up bra, it’s also a great strapless solution, and can convert itself into many different styles depending on what you need. But all of these features don’t mean a thing if it doesn’t work, so let’s find out how it sizes up.

Overview
Women have been in need of a good bra to go with the different items in their wardrobe for some time now. Regular bras leave much to be desired because they’re usually visible when wearing a strapless dress or halter top. Until now, there hasn’t been a really good solution, as many of the strapless bras that came out were bulky and visible while wearing a dress. We’ve resorted to using all sorts of things, including adhesive tape, to try to keep things in place.

The Claim
Perks tries to appeal to many women that are insecure about the size of their breasts, or the way their chest looks when wearing dresses. Their advertising features women that say they couldn’t wear a particular dress because of not having a proper bra underneath. With Perks Push Up Bra they were able to get the support they needed without having visible straps.

They say that depending on what kind of bra you’re in need of, you can turn it into a strapless, adhesive, backless, push-up, shelf, demi, no underwire, plunge, invisible, or halter style. Perks Push Up Bra has a patented system of 15 hidden hooks, so you can make it into any bra you want. Or you can forget about the straps altogether. You can use the bra up to 50 times, and then it appears to be disposable.

They also say that they’ve been seen on several TV stations, although it is not made clear whether they are referring to their product being featured on shows on these networks, or just that they ran advertisements on those channels.

They say that you can wear this bra with anything. Because it has thin edges so it won’t show under clothes. It also works to take away the bulging effect that most bras create, and has a system that contours to your natural shape, and also provide support and a bit of lift. Because there is no underwire used, you won’t have the discomfort that comes from an underwire bra.

By using the included padding, you’ll be able to get the push-up effect, creating more cleavage than you actually have. They also say that it’s very light, so you won’t even realize you’re wearing it after a while.

Features and Benefits of Perks Push Up Bra:

The Cost
Perks Push Up Bra is just $40 which includes shipping. When you factor in that you get to wear it 50 times before you will need a new one, that comes out to less than a dollar per use. So this may not be your new daily bra, but for special occasions this is a great buy.

The Commitment
You could probably think of many dresses and outfits you have that you don’t wear as often as you like because you don’t have the proper bra to go with them. So in this instance you don’t have to commit yourself too much to using the Perks Push Up Bra, because the situation will present itself naturally.

Evaluation
Since every woman’s body is different, it’s hard to create a product that works across the board, especially when dealing with breasts. But based on all of the third-party user feedback it is clear to see that Perks Push Up Bra has created something that has mass appeal. So many different women with varying body types and sizes have said that this has been the answer they needed.

However, you can’t use reviews like these to make a decision. With a product like this no amount of research will help you make a better purchasing decision. It’s one of those things you have to buy and try, rather than just analyze and ponder.

The answer to whether or not Perks Push Up Bra works is a resounding yes. The only complaint that was heard was that perhaps it doesn’t push up the breasts as much as it claims to, but as far as comfort goes it is a fantastic strapless bra and definitely comes through where other bras fail.

One thing we didn’t like is that they don’t cater to the larger-sized women out there and they only have A, B, C cups available.

Our Recommendation
Grab yourself a Perks Push Up Bra system and never look back. You’ll be able to get plenty of outfits out of your closet that you haven’t seen for months or even years because now you’ll have the right bra to make you look stunning.

What do you think? Does Perks Push Up Bra work or not?

← Previous Does the Ped Egg Really Work?
⚅ back to blog
Next →Does Smooth Away Really Work?

Customer Review on “Does the Perks Push Up Bra Really Work?”