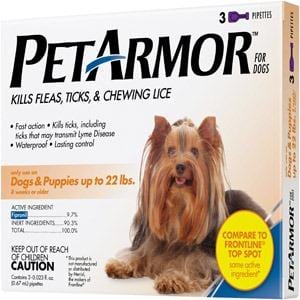 PetArmor is a brand of flea control for cats and dogs that is priced lower than competing products like Advantage and Frontline Plus. They say it works just as well with the same active ingredients, so we had to check out how well it proves it in real scenarios.

Overview
The bane of many cats’ and dogs’ existence is fleas and ticks. Take those out of the equation and they’re probably going to have a pretty nice life. For several years now there have been products available to treat your pet on a monthly basis so they aren’t susceptible to these biters. At first they were only available from your vet, but now you can buy them directly and apply them at home. The only beef that many pet owners had was about the cost involved.

The Claim
PetArmor claims that it’s a way to keep fleas off of your pet, not only because it kills and repels adult fleas, but all because it kills the eggs that end up turning into fleas later on. They say it kills a variety of parasitic pests in addition to fleas, like ticks and chewing lice. They say it works quickly, and lasts a long time, up to 30 days so you don’t have to keep applying it every day or every week.

They also say that it’s waterproof, so if your dog loves to get wet you don’t have to worry about it. They also say you can use it on pets that are as young as 8 weeks so your puppy or kitten doesn’t have to suffer. And perhaps the claim that gets the most attention is that it’s priced better than the competition, giving it a distinct edge if it lives up to the rest of its claims.

The Hype
Pet owners want the best for their dogs and cats, so promising that they’ll have a better quality of life automatically adds a bit of hype to a product. Also, asking consumers to compare your product to a well-known competitor is a bit of a risk, but it’s one that they take here.

The Cost
Alpecin claims that it’s not as expensive as competing brands, and since this is a product that you’ll use on an ongoing basis it’s good to keep costs as low as possible. We found one version of it at Wal-Mart for $28. We also checked out several other online retailers and saw that the average price was around $30 for a one-month supply. Comparing that to $50 or more for other leading brands and it’s clear to see that they’re winning the war on price.

The Commitment
Since this is only applied monthly it means that there is not a lot of commitment on your part as the owner. Be sure to mark your calendar so you know when to reapply it, as this can be a stumbling block and cause you to miss an application, allowing the fleas and ticks time to regroup and reattach. Compared to using a daily or weekly treatment this is a much smaller commitment level, and when you consider that you won’t be having to give your pet a flea bath, or use products like flea collars, flea sprays, or other methods, this is pretty easy for the owner.

Evaluation
The biggest question that seems to pop up is whether PetArmor works as well as Advantage or Frontline Plus. From everything we’ve looked at the results show that it is just as successful as these other products. Doing a cost comparison reveals that it’s also cheaper across the board. So you’re getting the product you need and paying less for it, which is a double bonus. The reason most are skeptical about the product is because of its lower price point and they want to make sure that they’re not getting less by paying less. We’ve determined that this is not the case here.

Getting the application process is crucial here, as some pets don’t really like it when it’s time to get their flea medicine. Be sure to get someone to help you if you know that your pet doesn’t like to sit still for these sorts of things. Also, approach them in a calm manner so they don’t get overexcited or overanxious. It’s not painful for them, it’s just a matter of applying it in the right spot. Follow the directions and tips that are included to increase your chances of success.

PetArmor is getting our Thumbs Up rating, since user feedback for it shows that it works just as well as other top sellers in this market, and at a lower price point. There’s no reason to pay significantly more for flea control for your pet when it does the same job or better. One claim we were specific about verifying was the one that states it works on a broad range of blood-sucking insects. Users have confirmed that it works at eradicating all of these sort of bugs, so you can have the peace of mind that your pet is protected.

Our Recommendation
Keeping your pet safe from biting and burrowing insects is a top priority, so you don’t want to overlook it. This represents a quick, easy, and monthly way to make sure that they can go about their business without getting bit up. That makes it a great product to try out for your cat or dog, and it gets our recommendation.

What do you think? Does PetArmor work or not?