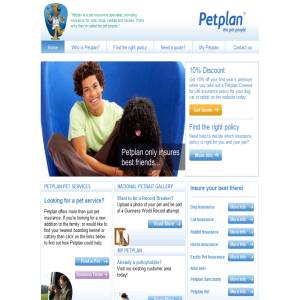 PetPlan must be doing something right, because they were named one of the fastest growing companies in America back in 2011. They’re already one of the top pet insurance companies in the UK, so it’s no surprise that they’re gaining ground on this side of the pond. Let’s see just what it is they’re offering here, what sort of coverage they provide, and whether you should opt for them over the others out there.

Overview
When pets are in their prime they are so full of life and so agile that it can be hard to think that one day they will slow down and start having health complications. But it’s just something that comes with owning a pet, and each of us has to come to terms with it at some point. The vet bills can be staggering, and rival the sort of expenses hospitals charge to keep us going. It’s no surprise that pet insurance is big business, as many people care for their pets deeply, and can’t bear the thought of them suffering, or losing them.

The Claim
PetPlan says that they virtually eliminate vet bills. They also say that filing a claim is easy, and hassle free. Most people dread having to file claims because they think that this is where the company is going to try to find a loophole so they can deny your claim. By making this process hassle-free, they are taking out the worst part of insurance.

Pet Insurance
Some people might chuckle at the idea of insuring their pet, but the more you think about it, the more it makes sense. Since dogs and cats both age more quickly than we do, the vet bills can come fast and furious when they hit a certain age. It’s usually after you’ve become endeared to your pet, and they are considered one of the family. It can be hard choosing between keeping them healthy and giving them the best care, and making car or house payments. With insurance in place you’re able to avoid getting sideswiped by high vet bills or overnight pet hospital stays.

The Cost
PetPlan varies by the breed of dog or cat you have, as well as how old they are, and even if they are a pure bred, or mixed. They will give you an instant quote, and even let you play with things like your deductible, and your reimbursement percentages so you can tinker with it until you see the monthly premium that sits well with your budget.

What’s Covered
Coverage depends on your level, either Bronze, Silver, and Gold, but they all cover exam fees, surgeries, prescription meds, cancer treatments, rehab, alternative treatments, and even behavior therapies. The Silver and Gold plans even cover things like when your dog gets lost, or worst case if your dog needs to be put to sleep because of an illness they acquire while being covered.

Pros and Cons
The pros of having your pet covered is that you can have peace of mind and just get back to the fun part of pet ownership. If they hurt themselves or just get old, you won’t have to worry about how to pay for it. The con is that if nothing happens to your pet you’re essentially paying all of this money for nothing. That might be a negative way to look at it, but it could leave a bad taste in your mouth to go for a year paying premiums and then not needing to take your pet in during that time. Insurance companies thrive on this, that’s how they make their money, by the majority of people not needing care, but still paying monthly.

PetPlan seems to be getting moderate reviews, which is normal. Reviews for insurance companies are typically slanted because if you’re happy with your coverage, you aren’t likely to come and tell the world about it. However, if you feel like you aren’t getting your money’s worth, or you fight with an insurer over a claim, you are more inclined to tell as many people that will listen. So many of the reviews are useless, since for every one complaint there are probably several more happily covered people and pets.

Our Recommendation
It can be tough to compare the different plans out there, and to come up with the right choice. Essentially, they are all offering the exact same product, but each one offers something a little different in order to separate it from the others. This may come in the form of what’s covered and what’s not, or lower premiums, lower deductibles, and so on. What we recommend is before going through each service, write down your three most important factors you’re looking for, including any special conditions or concerns you have based on their breed. Then find the company that has the best coverage at the lowest cost and hits on all three of your preferences.

What do you think? Does PetPlan work or not?

← Previous How Good is Livedrive for Online Backup?
⚅ back to blog
Next →Can the McCulloch MC-1275 Heavy-Duty Steam Cleaner Do A Deep Cleaning?

Customer Review on “Does PetPlan Really Cover Your Pet?”