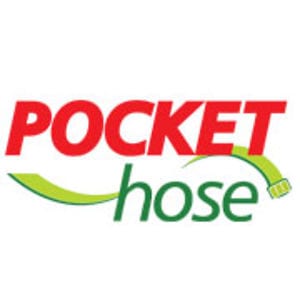 The Pocket Hose is supposed to expand to its full size when you’re using it, and then shrink back down to a more manageable and light weight when it’s empty. It seems like this will become a staple for most homes that have gardens or plants, or for those that like to wash their cars. But of course, only if it really works.

Overview
Recently there’s been an onslaught of these expandable/retractable hoses hitting the market. The first one we noticed was the XHOSE, and then came the Flex-Able hose in green instead of blue. We’re not sure which actually came out first, but they’re essentially the same product. Now comes the Pocket Hose into the mix, which is very similar to both the XHOSE and the Flex-Able Hose.

The Claim
The makers of the Pocket Hose claim that it won’t kink up on you when you’re using it, and that it won’t get tangled and twisted as you go about your business. They also say that it can fit into your pocket when it’s not in use. You’d have to have pretty big pockets, but we get the idea, it’s small and portable when it’s not full of water.

The Hype
No one can argue that the traditional garden hose is in serious need of an upgrade. It’s got way to many inherent flaws that make it prime for a replacement. But these hoses put on a razzle dazzle show during the infomercials, making it seem like they solve all of these problems and are the new hose of the 21st century.

The Cost
You can get a 25 foot hose for $21 which includes delivery. They have varying prices as you go up the ladder of lengths, and the longest hose you can purchase is the 100 foot version for $48. Comparing that to the Flex-Able hose you’re saving $7 on the 25 food example, and comparing it to the XHOSE you’re saving $6. So it seems they’re trying to compete on price in order to try and make up some ground in the expandable hose market. We were able to find a 50 foot Pocket Hose at Bed Bath and Beyond for $20 and you can pick it up in store to avoid shipping charges.

The Commitment
The big pitch here is that this hose is going to help you avoid back strain from lugging around your big heavy garden hose, and also help you from struggling with storing your hose once you’re done with it. For those that do a lot of watering in the garden, or use their hose to water their lawn, this should make those tasks more enjoyable.

Evaluation
Real world tests are showing that the Pocket Hose works as advertised, with a few drawbacks of its own. You may be used to leaving your garden hose out in the elements between uses, but to make sure that your hose stays in good shape you should disconnect it and store it in a safe place so that it doesn’t get weather-beaten. Since the product is relatively new there aren’t any reports on how well it’s able to stand the test of time.

Overall we’re giving the Thumbs Up to the Pocket Hose. It’s able to do what it says it can do, and it comes in at a price that is lower than competing hoses offering the same features. It might require a little more care and attention that a traditional garden hose, but with all of the added benefits you’re getting, it’s a good trade-off and makes this a worthwhile purchase. Look for it offline at places like Target or Bed Bath and Beyond for the best savings, you get twice the hose for less money.

Our Recommendation
If you’re going to get this hose, you may way to go with the larger sizes rather than the small, especially if you have a decent sized yard. Even at the 100 foot size you’ll still be able to easily manage the hose since it’s light weight, and since it will shrink down in size when no water is being forced through it. Users have said that the 50 foot size means you’ll have to disconnect and reconnect the hose to get to different areas of your yard.

What do you think? Does the Pocket Hose work or not?

← Previous Does StoneDine Cookware Really Work?
⚅ back to blog
Next →Sonicare vs. Oral-B: Which Works Better?

79 Customer Reviews on “Does the Pocket Hose Really Work?”