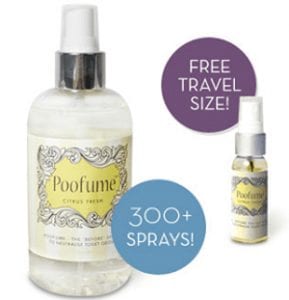 Most of us really stay on top of controlling the various odors that can occur in our homes, and one of the biggest concerns are those that can be found in the bathroom. Maybe a product like Poofume will serve a good purpose in taking care of some of those nasty smells that arise when the bathroom is used for relieving oneself.

Overview
Almost any bathroom in the home that you go into will have a least one can of odor remover there. It may be out in plain view or tucked away in a cupboard for occasional use. Poofume is a product that is specifically used to help to eliminate the odors that come after the toilet has been used. Now under normal circumstances an individual who wants to get rid of the lingering odors following a bowel movement will look for the air freshener. If there happens to be a bottle of Poofume handy then the odor problem can be addressed before it becomes something that needs to be contended with. It can be used as a odor preventative. The user just has to spray the toilet prior to using it and it is suppose to trap the odors within the toilet so it won’t permeate the air.

The Claim
The promoters of this product state that this is a before spray that traps the odors in the water of the toilet.They say that the product contains no harsh chemicals as it is comprised of natural essential oils. They claim that the fresh citrus scent is not over powering, and are not heavy in odor like standard air fresheners have.

The Hype
Focusing on the embarrassment that can come with toilet use is what is being centered upon. Most people are really hesitant to relieve their bowels in a toilet that is contained in a bathroom that is close to other rooms in the home where people may be present. A lot of homes have powder rooms off the main rooms and they are usually quite small, and some don’t even contain exhaust fans. So when they are used for bowel relief the odors often seep out and leave the individual as well as others somewhat embarrassed. This is where Poofume may be a real problem solver.

The Cost
You will have to pay about $16. which includes the shipping and handling for a bottle of Poofume. The standard size bottle is promoted as providing 300+ sprays, and as a bonus you will receive a travel size bottle.

The Commitment
Here is where it gets interesting. Of course if you are familiar with the Poofume product you are going to put it to use before you relieve yourself. What about for your guests, however? Unless they are aware of the product they are not going to know that it should be used before they have to relieve themselves, and may inadvertently think it is just another standard air freshener. Now you could always find a way to strike up a conversation with your guests when they arrive about this new product, but it may seem to be a somewhat weird topic to engage your guests in. The label on the bottle does indicate that it is a before going product, but how many of us really take the time to read labels especially in someone else’s home. In any event you can educate all your family members as to the benefits of Poofume.

Evaluation
This isn’t the first review that we have conducted regarding a before smell product for toilet use. We talked about Bathroom Secret which is a similar product. Then we wanted to be convinced that while novelty products are often just a passing fad, is a product such as this really in demand? We did note that one of these products that has been on the market for awhile is getting a lot of reviews and mostly good, so this is evidence that there definitely is an interest.

We are going to give the product a Try/Buy rating because first off all there is enough interest for this type of product. It seems to be reasonably and comparably priced. It is using natural ingredients, and it is non-aerosol. What prevents us from going with a total Thumbs Up is because there seems to be several other comparable products available that may be a little cheaper, doesn’t operate through spraying, and has established its credibility.

Our Recommendation
While this is a product that you are more likely going to get your family members to use rather than your guests Poofume may also be a product that you will want to carry with you so when the urge to eliminate your bowels hits you, then you won’t be embarrassed about using a public toilet.

What do you think? Does Poofume work or not?