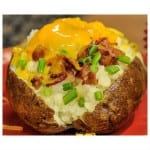 Potato Express is a simple envelope that you put uncooked potatoes in and then place into your microwave so that they come out fully cooked and perfectly done. Or so they say. As avid potato lovers we had to look at this product more closely to see if they’ve finally cracked the baked potato code.

Overview
You’re likely well aware of the common problems of baking potatoes. Using the oven takes forever, and using the microwave provides results that are often less than satisfactory. What this product is trying to do is give you oven results but from your microwave so you’re getting them in a fraction of the time. Potatoes might make it onto the plate more often if they were easier to cook, and if you had something that provided consistent results each time.

The Claim
The makers of the Potato Express say that all that’s required is placing them in the special sleeve and popping them in the microwave. Four minutes later you’re supposed to have perfectly done potatoes with tender skins and fluffy and fully cooked potato on the inside. They say that you can make any of your favorite baked potato varieties because it comes out the same as a baked potato out of the oven does. They also say you can use these cooked potatoes to make mashed potatoes or potato salad, taking away the need to boil potatoes.

The Hype
The hype comes from the discord of seeing so many microwave products flop. The microwave is just such an attractive piece of equipment because it gets things heated up so fast, but it has the inherent problem of cooking from the outside in, which usually means lousy potatoes that are cooked about half an inch on the outside and not at all in the middle. By claiming that this product solves that problem by providing a pocket within which the potato cooks all throughout there is a certain leap of faith you have to make in order to fully buy in to its viability.

The Cost
The Potato Express is $24 all together and will come with two pockets and two recipes guides as well as 2 cheese graters. They offer a 30 day money back guarantee on it, but stop to consider that you’d only be getting back $10 if you choose to return it, and you’d have to cover return shipping costs as well. That makes it a risky purchase if it doesn’t work out for you, and doesn’t provide the results you’re looking for, which is why most people are wondering if it works the way it says it does.

The Commitment
The main pitch here is that they’re drastically reducing the time it takes you to make potatoes, either baking them or boiling them. When you consider that baking a potato in the oven can take 40 minutes to an hour and it’s possible to both overcook and undercook them, it can be a real pain. Plus if you are tired of having to boil your potatoes to make things like potato salad or mashed potatoes you’d have a way to get the same results without waiting for the water to boil, and then waiting for the potatoes to be tender and fully cooked.

Evaluation
If you love the taste of potatoes but find that you don’t cook them as often as you’d like to, Potato Express seems like it would be the answer. Let’s take the summer time for example. It’s often too hot to want to turn the oven on, or even have a big pot of boiling water on the stove to boil potatoes. You might find yourself opting for a different side, or substituting potato chips as a side because you want the potato taste without the hassle of making potatoes.

The feedback on this unit is quite limited, so it’s still a bit of a gamble to make a determination on how it works. The concept is solid enough, since putting the potato directly in the microwave does get you some results, i.e. the potato gets cooked, just not very well. By placing it in the pouch you’re creating an environment that is like a steam room for it, so it likely provides the results it says but by steaming the potato, not by baking it. So if you’re looking for the classic baked potato taste, you’re not going to get it. This would have the consistency of a boiled potato that was kept whole, so the skin is going to be very soft, not the way it is when it’s properly baked. This makes it a good candidate for any recipe that calls for boiled potatoes.

The Potato Express is getting our Risky Try rating because there aren’t enough users that have said how it works, and the pricing structure puts a lot of the risk on your part. In all probability it will cook your potatoes, but the results you get will be somewhat like a boiled potato, and not exactly like a baked potato, the way they claim. It might get you a similar experience to a baked potato in a short amount of time, but if you’re expecting an entire replication of the experience it will fall short.

Our Recommendation
This is still a great addition to your kitchen if you want a fast and painless way to get the same results as you would from boiling potatoes, like for potato salads and mashed potatoes without having to boil a big pot of water.

What do you think? Does Potato Express work or not?

← Previous Does the Rover Rake Really Work?
⚅ back to blog
Next →Do Dream Team Pets Really Work?