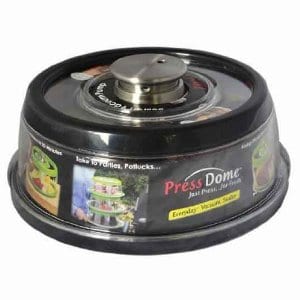 When you first see the PressDome you may wonder if it works or not, because if it did it would be one of the better products they’ve thought up. They show several different potential uses for it that would lead just about anyone to buying it if they had a guarantee that it worked as well as shown. But in today’s economy us consumers are once bitten and twice shy and unfortunately there’s been too many lousy products that have gone before this one. So does this one actually work?

Overview
No one likes the thought of wasting food, and essentially watching money go down the garbage disposal. There’s also no really good way to take healthy lunches to work. Both of these problems are apparently solved by this universal lid sealer, which is supposed to create an airtight vacuum seal in just a few seconds.

The Claim
The makers of PressDome claim that their product universally fits on all sorts of items you already own, like plates, party platters, bowls, and also things like cutting boards and even your counter tops. They say this effectively takes away the need for you to worry about using other sealing methods like Saran wrap, aluminum foil, Tupperware and other food storage containers. This in theory would lead to less money spent on disposable storage methods, and also lead to a greener planet.

They say that they have a patented process that seals quickly and easily and that it functions like many popular products like vacuum sealers, lunch bags, food warmers, and more. They say you could also use it for transporting food to a party, to a picnic, or even a camping trip. Another cost-saving method they say you can employ is buying food in larger quantities and then storing it, since this can be stored in the freezer.

The Hype
This is one product where the promo video itself creates all of the hype that’s needed. They exaggerate the sound that it makes when the seal is created, in an effort to get it in your head that the seal is strong enough to work, but it steal leaves most that seek it a little skeptical. Still, as former hunters and gatherers we’re crazy about our food storage and are ready to embrace anything that shows some promise.

The Cost
For $27 you get a set of two PressDome units and a recipe book and that includes shipping. They also have a 7 piece set that you can get for $83.31, or broken down into three monthly installments of $27.77 with shipping included. This is not three sets of the original offer, but gets you 4 of the original sizes, 2 junior sizes, as well as what they’re calling a “jumbo” size. Even though they say that their original size should fit 99% of your bowls and plates, by getting the smaller and bigger sizes you’re far more likely to find a match.

The Commitment
The basic premise here is that these will represent a reduction in the time you spend sealing and storing your food. If you’ve ever fussed with a vacuum sealer or had to clean up after a mess created by an improperly stored food item, you will appreciate the thought of being able to pop this top on, seal it up, and move on. You wouldn’t even have to portion of the different elements of a meal, you could just put a cover on the entire plate and enjoy it later, if this does what it says.

Evaluation
A lot of people have expressed their doubt about the PressDome and its ability to make an airtight seal that actually makes food last longer. Even if it does create the seal, is that enough to keep foods as fresh as they would be if they were vacuum sealed, and will it maintain that suction seal over a long enough duration to be effective. The proof is in the trying, but unfortunately they don’t make it very easy for you to try it, making you put a rather large amount up front and putting much of the risk on you.

One topic that is rarely brought up in a discussion about food storage is whether or not it’s a good idea to eat food that’s been stored for weeks, even if it does appear to be fresh. It’s recommended to eat leftovers that’s only one or maybe two days old, and even that’s pushing it. If you buy fresh produce you should make an effort to eat them while they’re fresh, and not store them for weeks on end and then eat them. It’d be better to get frozen fruits and vegetables if you want to go that route.

The jury is still out on whether or not PressDome works. Professional critics are saying that it’s not likely, and there’s very little evidence that anyone has gotten them to work. On the other hand there’s also very little evidence that they don’t work. It’s covered by a 30 day money back guarantee, but unfortunately a bulk of the purchase price is shipping. Of the $27 that you’d have to put in to get these, you’d only get back $12, plus you’d have to pay to return them. They are definitely making a profit on $15 even if everyone returns them.

Our Recommendation
If you’re convinced that these will work, we say go for it. But as they say, caveat emptor, there are a few signs that point to this not working quite as well as its depicted in the infomercial. The first is their buy one get one just pay shipping offer which inflates the price and jacks up the shipping charge so you’re actually paying more in shipping than you are for the products. If they sold you two for $24 and charged $3 for shipping it would be a different story, and we’d rank it as a Try, seeing how you could get most of your money back if it didn’t work.

What do you think? Does PressDome work or not?