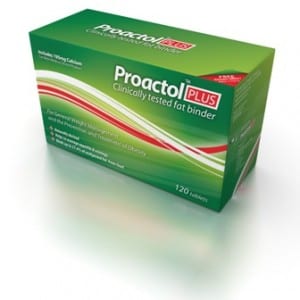 Losing weight can be hard, and many people turn to weight loss pills like Proactol as a way to make it easier. It’s comforting to hear that a product is all natural, but does that necessarily mean that it’s safe for your body? Many diet pills of old have claimed to use all natural ingredients, only to be later pulled from shelves because of their harmful side effects. We take our job here seriously, and would never endorse something that could potentially harm you, so let’s see what this pill entails.

Overview
Diet pills are usually the last resort for those that have tried repeatedly to lose weight with old fashioned eating right and exercising. Some people just don’t respond quickly enough to a lifestyle change in order to stick with it long-term. If you’ve decided to go this route, we recommend not going with a pill alone, and only using it as part of an overall weight loss program involving some form of regular exercise, and an earnest attempt to eat foods that are healthy and nutritious. That being said, on with the review:

The Claim
They claim that Proactol is taking the world by storm, but we don’t think it is. They say that it uses natural ingredients, and that it’s clinically tested, but this is a claim made by plenty of manufacturers out there, and it has basically lost all meaning. Saying something is all natural does not speak of its safety, or its effectiveness. Clinically testing something does not mean that a product works, nor that it was evaluated by any third party not paid by the manufacturer.

This is apparently a fat binder that blocks your body’s ability to store fat. But it doesn’t permanently alter your body’s ability to store fat, so it’s basically just a parlor trick that might work in the very short term, but will cause you to balloon back to your old weight, or even more once you stop taking the pills. They say that it lowers the cravings you have for foods you shouldn’t be eating, by making you feel fuller than you normally would.

The Hype
The hype is that this is just a diet pill, and they all say the same things. They all make it seem like they are the breakthrough you should use above all others.

The Cost
A one month supply is $70 and only puts you at the puny Bronze level. No one wants to be third place, right? How about going for the Gold at $200 which gets you a 3 month supply, effectively brining your monthly cost down to $66. But that’s not the top level, because they have a Diamond package that includes Acai Berry and a four month supply for what boils down to $57 a month.

The Commitment
The commitment level here is very low, which is the big attraction to a quick fix like pill popping for weight loss. Of course you could increase your role in this by eating properly, which the pills should help you do, and by getting regular exercise, which as you start losing weight you’ll probably notice you have more energy and more of a desire to be active.

Evaluation
Like with most diet pills you have to weigh the pros against the cons. Can this help you lose weight? Most likely not, and the results will only be temporary, and they will only hold up as long as you keep taking the pills. Most people are saying this had no affect on their appetite and they saw no evidence that it was working after repeated and prolonged use.

The problem with making the bold claims about how quickly you can lose weight with Proactol is that people can stick with it long enough to prove or disprove those claims. That seems to be their major stumbling block, because actual users are chiming in with the real scoop, allowing you to effectively disregard the testimonials at their site.

Did You Notice?
The doctor they use in their ad is “Dr. Hasselbacher” a professor of medicine and a chief of faculty, but they don’t say at which university. It’s these kinds of flaky endorsements that you have to be wary of. It just looks like someone they pulled off the streets and had read off of a cue card. Perhaps he is a real doctor, but our guess is that he’s not.

Unless you want to start using The Jungle Book as your frame of reference for what works in weight loss (they actually reference this as a way of bringing up Prickly Pear) we recommend avoiding Proactol altogether. You should consider looking into Raspberry Ketones, which were recommended on the Dr. Oz show, and which we gave a full review on. If you think they’re something that could help you we ended up liking Raspberry Ketones Max as the best raspberry ketones out there.

Our Recommendation
You can safely pass on Proactol, and don’t look back. It’s yet another flimsy diet pill that makes a lot of claims, provides a lot of “data” on why it works, and then leaves you with a product that gives spotty results to some people. If you’re going to take a diet pill, make sure that it’s something that gets the nod from a real doctor, that doesn’t present side effects, and that has peer reviews that give it the go ahead.

What do you think? Does Proactol work or not?

← Previous Is the Garry Vacuum Really That Great?
⚅ back to blog
Next →Do Mizu Pods Really Keep Plants and Flowers Watered?

Customer Review on “Does Proactol Really Work for Weight Loss?”