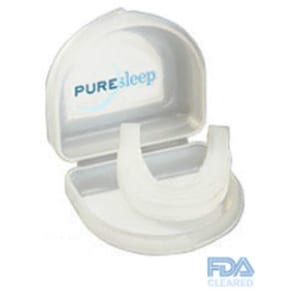 PureSleep is an anti-snoring device that is worn in the mouth, and is designed to help keep your airways open through the night. It looks similar to other devices on the market, but claims it can give you a dentist-caliber fitting from home, and at a fraction of the cost. So can this really work as well as the more expensive options out there?

Overview
Snoring is a very interesting problem, because just a very slight shift of the jaw and it can all go away. The only difference between many snoring devices is in how they can keep the jaw held forward. Some use an outside approach and hold it up with a chinstrap. Others take a nasal approach and widen the nostrils so the airway remains open. This is an oral device that says its custom fit is where the magic happens.

The Claim
PureSleep says that it is the number one snoring solution in the world. They also say that this is FDA approved, and since its debut it has not received any reports of any adverse reactions that have been filed with the FDA. They also claim that the method they use has been recommended by dentists and doctors for several years now as an effective way to reduce or eliminate snoring.

The Hype
If you have ever shared a bed with a snorer you know that there is a strong desire for some sort of solution. These products all get hyped up because sleep deprived individuals are on a mission to get some solace. Since there are so many duds out there, it can create the “I’ll try anything” mentality and people will basically buy any sort of product that promises results.

The Cost
They’ve got it set up so that you can try PureSleep for $10 which covers the shipping on 2 pieces. If you keep it you pay $60 the following month. If you end up returning it you’re just out the $10 shipping and the cost of return postage.

The Commitment
They say that this is relatively easy to get fitted to your mouth, and once you go through that process it’s just a matter of wearing it every night. With this one you will need to boil it so the plastic softens so you can fit it to your mouth for more of a custom fit.

Evaluation
PureSleep works on the premise that if you keep your lower jaw forward just a bit, it keeps your airway open, and therefore there isn’t anything vibrating against anything else, resulting in little to no snoring. It’s a very popular way to go about fixing the problem, and has been shown to have pretty consistent results. They’ve done a good job of replicating the kind of device your dentist would sell you, and the price is pretty unbeatable compared to that.

You’re Not Alone
The reason anti snoring devices are so ubiquitous is because snoring is actually a very common problem. That’s why it’s odd that there isn’t a more mainstream solution by now that everyone just uses and takes for granted. A winner will likely emerge in this race, and eventually we’ll probably get down to just a few ways to stop snoring.

Your quality of life is greatly effected by snoring though, so it is something that you want to rectify just as soon as you can. It can lead to things like sleep apnea, and at the very least can inhibit your ability to get refreshing REM sleep. It can also cause your partner to get a lousy night’s rest, and two people with dysfunctional sleep patterns will often end up with kinks in their relationship. You definitely don’t want snoring to effect other parts of your life so keep trying things until you find a solution that works for you.

PureSleep gets great reviews from people that say that it is like getting a dentist fitted snoring device at a very low cost. It’s the boiling and the molding part that does the trick, and though there are reports that this is not the easiest thing to do, there is some margin for error, and it will still work fine if you don’t fit it perfectly. Most people report a reduction in their snoring from the first night they used it.

Our Recommendation
This is a reasonable product at a decent price, and it’s set up in a way that you can try it out pretty cheaply, and see how it works. This is set up different than other money back guarantees that make you pay the money up front and then refund you the money if you don’t like it. With this, you aren’t charged until you decide to keep it so it shows that they have more confidence in their product than other companies.

What do you think? Does PureSleep work or not?