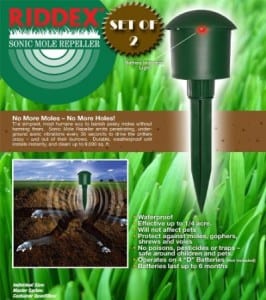 The Riddex Sonic Mole Repeller seems like it would be a humane way to get rid of moles and other varmints that can cause trouble in your lawn and garden. Using sonic technology to get rid of pests is not exactly a new idea, and there are some products that get the job done better than others, so let’s see where this one ranks as far as its effectiveness.

Overview
Moles and other pests can really wreak havoc on your yard. It’s not really their fault, they’re just doing what they do: dig, dig, dig. But the holes that they leave behind, and the half-eaten vegetables that they leave in their wake can really put them in the role of villain. Getting rid of the safely and humanely is a priority for most of us that have a mole problem, and getting rid of them without jeopardizing pets and family members would be ideal. From our research, there doesn’t seem to be a really good way to get rid of moles, so it’s still pretty wide open for a product to come along and be the answer.

The Claim
Riddex says their Sonic Mole Repeller will make it so you no longer see any moles, or their holes, in your lawn again. They claim it not only works on moles, but also on gophers, voles, and shrews. This is a way for you not to have to use poisons or traps, or even going as far as shooting them. You also don’t have to use pesticides, which can be equally harmful to family pets and even humans. They say that it sends out the sonic vibrations every 30 seconds, and that it drives the animals away to less aggravating yards.

The Hype
Sonic is a buzzword that is often used to make something seem high tech, and there are sonic toothbrushes, sonic vegetable peelers, and sonic face cleaners. The theory is that the device produces sounds that humans can’t hear, and pets aren’t bothered by, but that drives smaller critters up the wall, or at least out of your yard. It’s up to you whether to believe that’s what it’s doing, because since you can’t hear it working, you just have to leave it to faith and observable results.

The Cost
You can get a set of two Riddex Sonic Mole Repeller units for under $30. A great price if it works, but a waste of money if it falls short. That’s the Catch-22 with products that fall into this kind of price range. They’re either a great bargain or a big flop. From some of the feedback that has come in on them, it’s looking like these are rather ineffective, so it might be better to put your money towards something more reliable. If moles are really getting on your nerve, you might think it’s not a big deal, and will try just about anything to fix things.

The Commitment
All that would be required is for you to put these strategically in place where you’re noticing you have a problem. They say that each one covers an area of a quarter acre, so with the set you are clear for a half acre. After they’re in place you’ll just need to keep an eye on the battery indicator light to see when they need replacing. Other than that they should do their job without much involvement on your end. Compared to other potential solutions like setting traps and using pesticides, this would be a pretty hands-off way of going about it.

Evaluation
Riddex experienced some initial success with their in-home system that is supposed to keep roaches and other indoor bugs out of your home. It only makes sense that they would try to apply the same sort of system to other bothersome critters. The only problem is that sometimes when a company branches out they aren’t able to pull off the same sort of success that they had with the first product.

Of course they made the Riddex Sonic Mole Repeller waterproof, so you don’t have to go out and collect them each time it rains. One thing you might be concerned about is how many batteries you’d go through, if this is going off every 30 seconds. It would be better if it was motion activated and only turned on when it’s disturbed.

The jury is still out on the Riddex Sonic Mole Repeller, with a pretty good split by users on how well it works. You can give it a try if you’re in the experimenting mood, but by many accounts it’s not going to produce the results that you’re looking for. There are those that say it works fine, and even on larger yards. But there are also reports that this might not be safe for pets, and that it might give dogs a problem as well. This is one point of contention that we had as well, how do you make a sonic product that moles can hear but not dogs?

Our Recommendation
We’ll be on the lookout for a better way to get rid of moles and other pesky animals from your yard. We haven’t really found anything that offers the same sort of benefits as this, mostly the humaneness of it. It’s easy enough to find traps and other methods, and we’ve looked at some of the other sonic competitors, and once we get done evaluating them we’ll bring the best one to your attention.

What do you think? Does Riddex Sonic Mole Repeller work or not?

← Previous Does Tommie Copper Really Work?
⚅ back to blog
Next →Does the Bunga Bed Pet Dog Shoe Really Work?

349 Customer Reviews on “Does the Riddex Sonic Mole Repeller Work?”