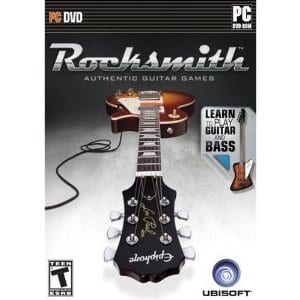 Rocksmith might be for you if you like to play Guitar Hero but wish that you were actually playing a real guitar so that you could develop a practical skill. The only question is whether or not you can use a video game in order to learn to play the guitar.

Overview
When it comes to playing the guitar there are only so many different ways to learn. You can get one-on-one instruction, or you can get one of those self-help programs that promises to teach you how to play it on your own without taking lessons. This is one of the first games we’ve seen that promises to be able to teach you how to play, and they’ve actually found a way to integrate a real guitar into your TV or computer screen.

The Claim
Ubisoft claims that Rocksmith say that it’s the first game to hit the market that allows you to take your current guitar and plug it into your device, whether that’s a computer, an Xbox, or a PS3, and be able to start learning how to play the guitar shortly after. Almost all other guitar based games make you use their included guitar that isn’t really a guitar at all, but more like a guitar-shaped controller with buttons and tabs that don’t correspond exactly to the way a real guitar is played.

The Hype
The hype would have to be due to Guitar Hero and Rock Band, games where you can pretend to play the guitar, but aren’t actually doing it. What’s funny is there are people that are bona fide experts at playing these games, but if you toss them a real guitar that can’t play tune one on it.

The Cost
Depending on which system you get Rocksmith for, you’ll pay anywhere from $30 to around $50. That’s about the typical price for a video game, but when you compare it to taking guitar lessons it’s a steal if it can actually get you playing. Compared to self-help books and programs it’s also pretty competitively priced. If it works and the end result is you can go from not being able to play to being able to play, it’s a huge bargain.

The Commitment
Just like with any skill, you’ll have to put in some time to actually learn how to play. It’s not like the Matrix where you can just load the program and all of a sudden you know Jiu jitsu. But compared to teaching yourself, or learning from a book, you’ll likely see more progress in a shorter amount of time. Compared to taking guitar lessons from an instructor it’s definitely more convenient and less expensive.

Evaluation
One of the fun things that Rocksmith does is that it helps you get better at playing the guitar when it notices that you’re doing better. It gradually raises the difficulty level so you’re not getting bored. It constantly challenges you so that you can improve at a more rapid pace. Sometimes learning to play the guitar can be pretty tedious and can seem overwhelming. This game does a good job of keeping it fun so that it keeps you interested and keeps you practicing. Getting things into the muscle memory is the trick here, and you don’t want to overthink while you’re playing, which this helps with.

Purists will say that this isn’t a very good way to learn to play guitar because it’s focusing too much on specific songs, and you should be learning the fundamentals so that you can play any song one you get the chords down.

Rocksmith is getting our Solid Try rating. Most reviews for the game show that it makes playing the guitar fun, which is the number one feature you’d want to look for. There isn’t too many songs to choose from, and one of the criticisms it gets is that there should be more songs to choose from so that you can broaden your library of songs you know how to play. Perhaps they will release an extension that has more songs, but for now you might get sick of playing what’s available, especially if the songs it contains don’t really float your boat.

What do you think? Does Rocksmith work or not?

← Previous Do Raspberry Ultra Drops Really Work?
⚅ back to blog
Next →Does Yodle Really Work?