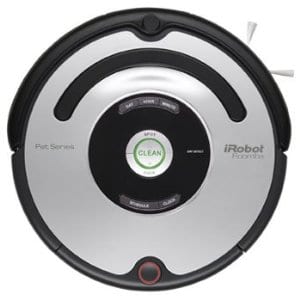 The Roomba by iRobot takes a page right out of The Jetsons. While we might not have flying cars and moving walkways that take us from place to place, at least we can have a robotic vacuum cleaner to clean up after us. These have become really popular, and seem to be little troopers, happily going to work on the messes that happen in most homes. But do they actually get your floors clean, and can you rely on Roomba to get all of the areas of your floors?

Overview
Nobody likes vacuuming, it’s a thankless chore and one that needs to be done quite often. They say that you should vacuum once per week for every person you have living in your home. For a family of five that’s almost every day! That can get rather tedious lugging the vacuum in and out of storage to running it around the common areas of the home. It may have taken rocket scientists to figure out how to build the Roomba, but it doesn’t take one to see why most people would want one.

The Claim
The claim made by iRobot is that all you have to do is set Roomba to automatically vacuum your floors, and then let it go to work. The end results it you will be able to cross this annoying chore off your list permanently, just stopping long enough to empty it’s collection bin. Easy as can be.

They also make a mop called the Scooba, which claims to be able to mop your floors, but we’ll get to that in a future review.

The Hype
Once you see a Roomba in action, who doesn’t want one? The hype is that this is a glimpse of the future, where everything will be automated and we won’t have to lift a finger. There’s also a buzz going around in the form of word of mouth advertising as people share their success with the Roomba with friends, or when company comes over and sees it in a corner it’s definitely a talking point.

The Cost
You can go with one of many of their different models, each with their own list of features and price point. Some of the least expensive models will set you back around $280 with some of their most advanced models going for $500 or more. So they’re not very cheap, but when compared to something like a Dyson upright, they are about on par. If there were only a way to combine the two technologies.

The Commitment
Aha! Here is where the Roomba makes its sale. Once you program it, there really isn’t much commitment, other than emptying its compartment once it’s finished. You truly set this up, and then try to forget about it as you go about your business. It may take some time reading the instructions and making sure you set it up properly, but the investment is worth it.

Evaluation
Most people that have bought and tried out a Roomba have been happy with their purchase. Several have shown the results that they get, compartments full of dust and dirt, and there’s even several people that have done time lapse video showing how the Roomba gets to all the spots in a room. There may not seem to be any rhyme or reason to it’s movements, but its programming makes it remember where it’s been, and its sensors tell it where it still needs to go.

Some have raised the question of whether or not it is able to get around obstacles well enough, or if it has enough power to get enough suction to get all the dirt out of the carpet. Well, the answer to these is that yes, the programming inside of it is designed to deal with obstacles like furniture, but you should pick up any toys or other items in the middle of the room so it can make clean passes and circles.

As far as the power issue goes, it creates a good amount of suction, but perhaps not as much as some of the more advanced upright vacuums with cyclone technology. The trade off is that you can set your Roomba to run every day if you want, that way you won’t have to worry about any dirt and dust building up, and it’s definitely powerful enough to handle a day’s worth of buildup.

It’s hard to argue with the overwhelming visual proof, and positive user feedback. The Roomba does what it claims to be able to do, and iRobot keeps expanding their line of products to include all of the things in the home that you don’t like to do. They have a mop version of Roomba called Scooba, and early reports say this is a winner as well. We give it a thumbs up and eagerly await reviewing other iRobot products.

Our Recommendation
We definitely approve of the Roomba and recommend you pick one up if it’s in a happy zone for you financially. While it may be on the expensive side, the time savings and hassle savings of not having to vacuum any more are too great to ignore. If you don’t vacuum as often as you think you should, this is a great way to set it up so that you don’t have to worry about it any more. You’ll have a cleaner home with less work, which is a winner in our book.

What do you think? Does Roomba work or not?

← Previous Does Dragon Naturally Speaking Really Work?
⚅ back to blog
Next →Does Your Baby Can Read Really Work?

4 Customer Reviews on “Does the Roomba Really Work?”