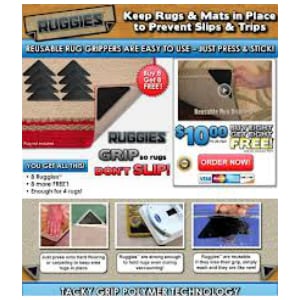 Ruggies are non-slip pads that are placed under your area rugs so that they stay in place and don’t curl up. If you’ve been tripping over your rugs, or having trouble getting them to stay in place, these might be for you if they actually do what they say they can do.

Overview
Big area rugs can make a room look great, and smaller mats in strategic locations can make it easier to stand in front of the sink and do dishes, or to have a place to take off your shoes when you come home. But often times these rugs will slide around, and they can be a real pain to vacuum and keep them looking nice. There are a few different ways to try to keep the rugs in place, like putting sticky tape underneath, or using a rug pad that goes under the rugs, but each of these has potential drawbacks.

The Claim
They say that with Ruggies in place you’ll be able to vacuum your rugs without sucking them up off the floor. They also say that when the pads get dirty and stop sticking all you have to do is rinse them off and they’re good to go again. They say you won’t damage your floors because these do not use any adhesive. So if you’ve tried double sided tape to try to keep them in place, and ended up leaving a gummy, sticky mess behind, you won’t run into that problem here.

They say that because of the material that they’re made of, they won’t ever lose their tackiness or their gripping ability. They also say that since they’re interchangeable and reusable they’re better than pads that go under rugs, since you have to cut those to size and therefore can only use them on the rugs that they’ve been fit for.

The Hype
At the end of the day the problem of having your rugs curl up might not seem so big. After all, it’s definitely a First World problem. But if it’s something that has been annoying you for some time now, and you haven’t figured out a way to get your rugs to stay where you want them and stop from having the edges curl up, it’s going to matter to you.

The Cost
You get a total of 16 Ruggies for $26 because they sell it on a buy 8 get 8 free just pay shipping. The gimmick is that shipping costs more than the product does, which renders their 30 day money back guarantee useless, since you’ll be out $16 plus return shipping charges. There are also several reports of customers being charged around $50 after being upsold to an advanced form of Ruggies.

The Commitment
The point of this product is that it’s supposed to solve the problem of keeping your rug in place, and do away with the aggravation of having to try to vacuum your rugs and sucking them up when you get to the corners. If they worked according to their infomercial, you wouldn’t have to worry about your rugs again, and would simply be able to get on with your life.

Evaluation
Those that have tried Ruggies haven’t had too many nice things to say, and the common complaint is that they simply don’t stick to the rug. That’s pretty much their number one feature, so if they can’t get that right they’re sunk. The interesting thing is that with so much negative feedback they are still banking on new customers to come along and get roped into the the appeal of their product. Hopefully enough people can learn that there isn’t any sign that these work, and it simply isn’t a smart buy.

Overall, Ruggies are getting our Thumbs Down rating, as there is simply too much evidence that they don’t work, and that ordering these and dealing with customer service is more of a hassle than it’s worth. Any time you see a product that has a higher shipping cost than the purchase price, red flags should start raising. Here you’ve got an advertised price of just $10 but shipping is $16. No matter how you cut it, the company is going to make money, regardless if the product works or not. So what incentive do they have for making a product that works?

Our Recommendation
Luckily we were able to find an alternative to Ruggies, which provide all of the same benefits in a highly-rated, well-reviewed package that comes in at a lower price. It’s the Ultra Stop Non-Slip Indoor Rug Pad, and it is simply placed under your rugs, can be cut with scissors so it’s custom fitted to your rug, and also washes easily so you can keep using it even after it gets dirty. At $21.57 delivered to your door this clocks in at a better price than Ruggies, so it’s a better choice all the way around.

What do you think? Does Ruggies work or not?

← Previous Does the Digitone Call Blocker Really Work?
⚅ back to blog
Next →Does Purasun Really Work?