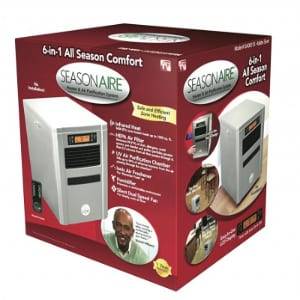 The Seasonaire gets its name because you’re supposed to be able to use it year round. That’s because it doesn’t just function as a heater, but also as an air purifier and humidifier. It would be great to have a heater that works to clean the stale and dry winter air, all while keeping things toasty, but can a little unit like this one, weighing less than 25 pounds, really do the trick?

Overview
If you live in a climate with moderate to harsh winters, you know what it’s like to spend a majority of the time indoors, and you also know what it feels like to be chilled to the bone. Whole house heating systems can cost a ton to run, and they end up heating unused rooms and areas. They also don’t do anything to address the quality of the air that they’re circulating. Space heaters only heat the area directly in front of them, and are just as wasteful, if not more so. Recently, whole room heaters have been popping up as a possible solution to all of these problems.

The Claim
The claim that most people would be interested in is the one that states that this unit will help bring down your heating costs. With an economy that can’t seem to make up its mind there is some comfort in the idea of being able to heat your home and keep your family warm without breaking the bank. Aside from cutting costs, the Seasonaire is meant to make your home a cleaner environment to be confined in during the more Arctic months of the year. It does this by cleaning, purifying, and humidifying the air to create the perfect indoor environment.

The Hype
We’ve seen portable heaters like this one before, but not one that has so many functions in one unit, and serves multiple purposes. By endowing this with so many features, there is a bit of hype because of them will have to work properly in order for the entire unit to get a passing grade. Sometimes it’s the simpler designs with only a few features that end up faring better since there is less chance of something not working right.

The Cost
The total cost of the unit is $400. The way they break this up is pretty unique though. They have a trial offer for $40 and lasts 60 days. During that time you can choose to return it and you’ll get a refund of your initial $40. If you want to keep it they don’t bill your first payment until after the 60 days is up, and then it’s 4 payments of $90. What makes this unique is that most “free trials” are charged as shipping charges that are not refunded if you choose not to keep it. But they make it quite clear that shipping is free, and that your trial fee is a fee that is refunded upon return.

The Commitment
The big pitch here is that you’ll be saving on energy costs by using this. The theory is that you’ll end up turning the thermostat down because you’ll be able to heat the room your using with this unit, and therefore don’t need to have the heat on so high. This is a popular way of heating in many countries, and is almost caveman style because you are only creating heat and warmth where you need it.

Evaluation
This unit is doing a really good job of ticking the box on all the concerns families have in the winter. First, the cold is the main factor, and they’ve addressed that with their infrared heating system that provides a different sort of heat than a conventional heater. Next, they’ve solved the problem of indoor air being stagnant and dirty because of the windows being closed and everyone staying in all the time. They’ve got both a HEPA filter, a UV light, and an ionizer to make the air not just warmer, but more breathable.

The one function that leads to skepticism is the ionic air freshener. Ionic air purifiers have taken a beating by a Consumer Reports study that showed they don’t measure up to HEPA filters. However, they did note an exception, and that was on the units that use a fan to push the air through. With the Seasonaire, they are not relying on the ionizer feature to purify the air, it already passes through a HEPA filter, plus it is pushing the air through with a fan, so it gets a passing grade either way.

They point out that the Seasonaire is not meant to prevent any colds or allergies, but we believe that it would provide a good amount of peace of mind, and it’s a step in the right direction as far as being healthier, warmer, and happier during the cold and unforgiving winter months. For that reason we’re giving it our Thumbs Up rating and recommend taking them up on their trial offer.

Our Recommendation
Worst case scenario, if you choose to return it you’re only out the return shipping costs. If you use it for a bulk of the 60 days then it should be just about a break even. Best case scenario, if you like the results you get with it, you can likely recoup most of the cost of the unit with the first winter. After that it’s just pure savings, and you get to use it year round. They’ve got a five year warranty on it, so it should give trouble free operation for several years, which makes it a good buy.

What do you think? Does Seasonaire work or not?

← Previous Does the LightStim Really Work?
⚅ back to blog
Next →Does ACCU-CHEK Nano Really Work?

30 Customer Reviews on “Does the Seasonaire Really Work?”