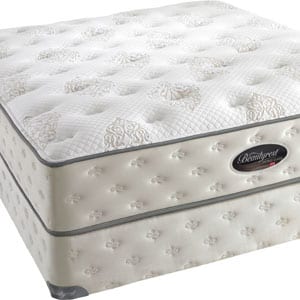 Simmons Beautyrest is one of the most popular brand names in mattresses, and many people wonder if it actually lives up to its reputation as being one of the better night’s sleeps out there. The mattress industry is full of a lot of hype, with premium mattresses costing thousands of dollars, and lots of beds using gimmicks like allowing you to choose your own number, and others that have space age memory foam. But is all of this really necessary, and do you really need to be “sold” on a mattress? Shouldn’t the proof be in the lying down on it? We’ll take a look at what actual owners have said, and see how it really stacks up.

Overview
They’ve been around for over 30 years, with the same logo and the same sort of ad campaigns, the most famous being the one where they drop a bowling ball onto the mattress and it doesn’t knock over the bowling pins that are stacked on it. This very well could be the first time a mattress company tried to use an advertising gimmick to get you to buy their mattress, but it definitely wasn’t the last. It can be hard to know which mattress to go with, because you don’t know how it will stand the test of time, and whether the money you put into it will be a good investment, or a waste of cash. Luckily there are those that have gone before you and they’re willing to give you the head’s up.

The Claim
Simmons Beautyrest is basically riding on their same invention from way back in the day, the special coil system they call Pocketed Coil technology. As other mattress technologies have emerged, they have incorporated them into their bedding. For example, they now have beds that feature memory foam padding in addition to the standard features, which in theory should provide a more comfortable experience. Other than that, we’re not really seeing a lot of new features or ingenuity here, but there are apparently enough differences in features to justify price ranges of thousands of dollars or more.

The Hype
The hype came from the aforementioned commercial, being one of the first commercials to show a mattress that could allow one person to get in and out of the bed without disrupting the sleep of their partner. Nowadays there isn’t much hoopla surrounding them any more, but they have made a name for themselves and still sell plenty of mattresses year after year.

The Cost
Simmons Beautyrest has several different models, ranging in price from $1000 on the low end to over $9000 on the high end. For these prices you’d expect to have a pretty good mattress, one that would last you several years with no complaints, and plenty of good night’s sleep.

The Commitment
All that’s needed with this mattress is to replace your current mattress with it. You don’t have to fool with any sort of gadgetry like you do with the Sleep Number Bed. It’s a pretty straightforward mattress, and all of the technology has gone into the interlocking springs that are inside of it, what they call their Pocketed Coil system.

Evaluation
Simmons Beautyrest gets mixed to negative reviews on their various models. Obviously most of the feedback is on their lower end models, because those that drop nearly ten grand on a mattress are not going to come back to a review site and complain about it if they don’t like it. But even spending a few thousand dollars on this, you’d expect that most feedback would be positive. After all, people have a general idea of what they’re buying before they buy it, as most purchases are done in the store, where you can lay down on the mattress and get a feel of how it would be to sleep on it all night.

Common Complaint
One of the biggest complaints cited by most negative reviews is that the bed just doesn’t hold up over time. Some say it gave out after only 2 years of use, others said 4, but most agreed that it just couldn’t stand the abuse of getting slept on night after night. When you’re going to put this kind of money into something, you want to get a good amount of use out of it. That’s why this is one complaint to be concerned about, as it speaks to the kind of value you’re getting, or not getting.

Because Simmons Beautyrest has such wide ranging reviews, we can’t give it our nod of approval. At some of these price points it should be considered more of a luxury item, and therefore should be a definite crowd pleaser. That means it should have an approval rating of at least 80% or higher, allowing for 20% of people that are just never happy with the purchases they make, and allowing for a defective unit once in a while. They are nowhere near this level, which is why we’re not recommending them overall.

However, you may have success with one of their higher priced models, but we couldn’t find enough feedback to make a reliable conclusion on them. It’s always odd that a manufacturer would make its lower priced models with such lower quality than it’s higher priced ones. You’d think it would make them all good, and just make its luxury models even better, the way Toyota makes its standard cars good, but its Lexus line great.

Our Recommendation
You’re not starved for options here, and there’s no reason you should think that you have to go with a Simmons Beautyrest as your bed of choice. Try it out as much as you can before you plunk your hard-earned money down on this one. See how well you like memory foam mattresses and other competitors. If you like the way it feels in the store, then you should put it on your short list, but still do some more comparison shopping before making a final decision.

What do you think? Does Simmons Beautyrest work or not?

← Previous Do Dermalogica Skin Care Products Really Work?
⚅ back to blog
Next →Can Something Like the Belly Bandit Really Work?

45 Customer Reviews on “Is a Simmons Beautyrest Mattress Really That Great?”