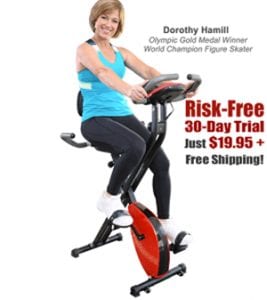 We really want to keep up with the get fit frenzy that usually comes as spring draws near. This time we wanted to take a look at the Smoothxbike. It will soon be time when everyone can get their bikes out to compliment their exercise regime, but not everyone has that opportunity.

Overview
The Smoothxbike is a compact portable workout bike that is ideal for those with minimal space that they can allot to exercise equipment. It is also a possible solution for those who cannot enjoy the benefits that regular bike riding affords.

The Claim
The company claims that this bike offers the same quality as you would get from using a gym. You don’t have to rely on a bulky machine to get the cardio workout you are looking for. They are claiming you can burn calories while sculpting your body at the same time. They say it is easy to use and is whisper quiet.

The Hype
All the right words are being used in the promo material to attract the attention. It is compact, stores easily, simple to use. It brings results that are being sought after such as shedding calories, toning the body, and a cardio workout. It is quiet which is another important feature. It is being endorsed by Dorothy Hamill, Olympic gold medal recipient as a world champion figure skater.

The Cost
You are going to have to look at the cost carefully. What is going to stand out for you at first is the risk free trial which is going to cost you $19.95 which they say is refundable. The cost continues with 7 payments of $39.99. So when all is said and done you will have paid a total of $299.88.

The Commitment
As with any type of exercise equipment you are going to have to commit to using it, and on a regular basis if you are expecting the results it indicates that it can give you. All too often purchases for items like these are made, and used with great enthusiasm for a week or two. Then they end up getting stored away and forgotten about.

Evaluation
We looked at a similar product before called Sit N Cycle. We figured that because it too was light and compact it would be great for those who don’t have a dedicated exercise room.It got more thumbs down in its rating than thumbs up. It was less expensive than the Smoothxbike.

We’re going to give the Smoothxbike a try/buy rating. One of the things that caught our attention during our research is that Sit N Cycle is also being promoted by Dorothy Hamill. So which one is it that is being touted as being the best one? It may be that because the Sit N Cycle was receiving it’s share of complaints that it was decided to come out with a different and improved version like the Smoothxbike, but nothing in the promo material seems to suggest this.

Our Recommendation
We suggest that if you are really interested in this version of an exercise bike that you compare both the Smoothxbike and the Sit N Go. See if any of the complaints have been addressed. With Smoothxbike being new on the market it is too soon to know what if any the flaws are going to be. Also what justifies the price difference between these two exercise bikes?

What do you think? Does Smoothxbike work or not?

Customer Review on “Does the Smoothxbike Really Work?”