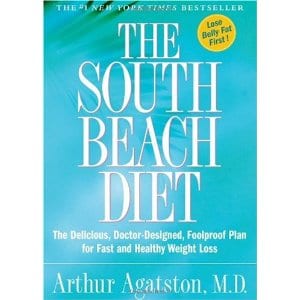 You’ve probably head of the South Beach Diet but didn’t really know what it entails, or if you should try it. It got a lot of attention back when the Atkins and other low and no carb diets were the rage. Even though it started as a book written by a doctor, is this something you can trust to lose the weight as a long-term lifestyle?

Overview
The biggest obstacle most people face when trying to lose weight is not having a proper entry and exit strategy. You have to size up what you want to accomplish, how you’re going to get there, and how you’re going to keep it going for the rest of your life. This diet seems to break things down into three different phases. The first is the toughest, where you’re giving up your favorite foods in an attempt to kill your cravings. The next one introduces those foods back but in reasonable quantities. And the last phase sets you up for eating right for life.

The Claim
South Beach Diet claims that you can lose weight quickly and safely without resorting to counting calories, restricting all carbs, and reducing your fat intake. They say it was initially developed for cardiac patients as a way to help them recovery from surgery and get into a healthier state. It grew from there into a phenomenon and now is still used successfully by dieters.

Most people have a lot of doubt when a diet gets this popular. They figure it’s just a trend and there wasn’t sound backing to it. But it’s really stood the test of time, and the philosophy behind it is based on scientific research. As more news comes out, this diet seems to still be relevant, and effective, meaning it was no flash in the pan.

The Hype
Even though a lot of the initial hype for this diet has died down, it still remains popular, and people are still discovering it today. The thing is, once you get past the hype and the confusion it becomes clear that this is not like a no-carb diet, and is based more on the glycemic index which has been proven effective time and time again as a way to keep your blood sugar levels in the right zones, and put your in a state of losing weight.

The Cost
South Beach Diet depends on how far you want to get into it. You can get the paperback book at Amazon for about $10, and that will lay out what you need to do, and it will also explain why you’re doing it. If you don’t typically like to learn the why, and just like to know the steps on how to do it, you might want to take the time to learn a bit about the science behind it. A strong why can help you through those times when you don’t feel like doing it, and start to question why you’re doing what you’re doing.

The Commitment
The aspect of this diet that takes the most commitment is the different phases it has. During the initial phases things are pretty strict, and many people find that they are not able to stick through it and end up cheating or screwing things up and having to start over. It can also lead to frustration and demotivation to try again. But if you can make it through the first phase and into subsequent phases, things get progressively easier, and the last phase is one that you’re meant to adopt as your new way of eating.

Evaluation
The South Beach Diet has a lot of good points, and following it will definitely make you healthier than if you just eat whatever you want and don’t put any restrictions on yourself. The reason is that it swaps out a lot of the foods that are responsible for putting on weight with foods that are known to be healthier for the body and have been shown to spur weight loss. Just taking the bad stuff out of your daily intake and replacing it with better stuff is a way to start turning things around.

If you can embrace the idea of phases, and know that the first phase is only a short term way to get your body to recalibrate to your new way of eating, this might be a diet that works for you. If you look past the hype, and treat it as a legitimate way to lose fat and be more healthy, it should provide you with the results that you’re looking for.

The South Beach Diet is getting our Thumbs Up rating, as most people are a little confused as to what it really is. Once you delve further into what it really entails, it becomes clear that it’s not its fault that it got so popular. It definitely deserves a read if you only have heard things about it, but haven’t explored what it’s all about.

Our Recommendation
The principles of the diet are sound, but we don’t know if we’d go so far as to buy their packaged bars or other meals. Most times these are just optional and a way to fill in nutritional gaps if you’ve got a busy lifestyle. They can also be used in a pinch if something comes up and you need to quickly change your plans. Other than that we’d focus on creating your own meals from their authorized food lists, and follow the phases as best as you can.

What do you think? Does the South Beach Diet work or not?

← Previous Does the Dating Black Book Really Work?
⚅ back to blog
Next →Is Yahoo! Web Hosting Any Good?

2 Customer Reviews on “Does the South Beach Diet Really Work?”