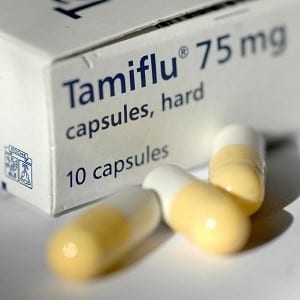 Thinking of taking TAMIFLU and wondering if it actually works? It’s by prescription only, so your doctor will have to diagnose you with the flu before you can take it. There is enough debate as to whether or not it works, which may be enough for some people to want to take a pass on it.

Overview
The window for taking Tamiflu is pretty short, first you have to be aware of your own symptoms enough to make it into the doctor’s office in the first few days. This is because it’s meant to be taken only if you are in the first two days of having symptoms. Take it before or after this window and you likely won’t get the results you’d expect.

The Claim
Genentech, the makers of TAMIFLU, say that it can help treat the flu in otherwise healthy adults, including symptoms like aches, fever, and chills. They say that the flu requires stronger treatment than the typical cold, and that normal methods of dealing with a cold are not effective for treating the flu. They say their prescription medication works better than over-the-counter remedies you can find in the store, many of which only treat one or a few symptoms, rather than the whole package.

The Hype
The ad for this drug has been running nationally, and has broadened awareness to the point where most people know they can go to their doctor and get a drug that is for the flu. The hype is that for the longest time it was thought that the flu just had to run its course if you got it, and the focus has been on preventing the flu by getting flu shots.

The Cost
Without insurance you can expect to pay around $120 for TAMIFLU. For some this might be cost prohibitive, and for others getting back to work and feeling normal again will be worth it, especially if their health care plan covers a lot of the cost.

The Commitment
You’ll want to take this as directed by your doctor, and make sure that you follow the instructions carefully. Taking it sporadically and not following the dosage instructions could prolong your flu symptoms, and cause side effects that sound just as bad as the flu itself. If you’re already suffering from flu symptoms, you wouldn’t want to add even more nauseous feelings, or feeling like you’re going to vomit, or having bouts of diarrhea along with abdominal pain and headaches. These are just some of the side effects that can come along with it.

Evaluation
The debate over TAMIFLU rages on, but one bit of information that seems a bit fishy is that Roche, the company behind the company that makes TAMIFLU is keeping the majority of the research findings confidential. If the drug works so well, why not release that information and put any doubts to rest? The only logical conclusion is that if the public knew the full report they wouldn’t be lining up to pay $100 or more on a drug that will only provide spotty results.

Anytime you find out that a research study involved the scientists being on the payroll of the company whose drug is being tested, it sounds like there would be a definitely conflict of interest. That’s the sort of stories that are behind the back and forth debate going on over this drug. But all of the controversy doesn’t stop them from selling it, or putting ads on TV, so it’s a good idea that you did your research before asking for it from your doctor. It might sound very enticing to get some fast and powerful relief from the flu, but if you’re going to shell out the money for it and put your health at risk to take it you’d want to make sure that you really are going to feel better.

We’re giving TAMIFLU the Risky Try rating. There are those that say it worked for them, and others that say it didn’t, and with the list of possible side effects it doesn’t seem worth it. The tricky bit is that you don’t know how long your symptoms would have lasted if you hadn’t taken it, since you can’t serve as your own control group. There’s no reliable way to say that it worked for you, and depending on how much of the bill your insurance picks up, this could be an expensive drug to try out.

Our Recommendation
There are so many all-natural remedies available to help you feel better during the flu, that you should exhaust off of these options before resorting to a prescription drug. And while OTC meds might not be as powerful, a combination of all-natural pampering mixed with over-the-counter options when you’re in dire need seems to be a safer bet than going with something so controversial and priced so highly.

What do you think? Does TAMIFLU work or not?

← Previous Does Skinny Fiber Really Work?
⚅ back to blog
Next →Does The ABC Diet Really Work?