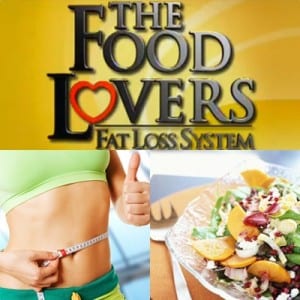 The Food Lovers Fat Loss System says you can keep eating the foods you like, but get them to help you lose weight instead of gain it. Perhaps one of the biggest drawbacks of starting any diet program is that they immediately want you to cut out your favorite foods, and especially your cravings. Then you feel guilty for wanting them, and feel bad for cheating with them. So can this really help you avoid all of that mess and just start losing weight and feeling great?

Overview
They have cleverly removed the term diet from their name, and basically they are saying that you can’t really call something a diet if it doesn’t cause you to starve, or give up the foods you love. We have to admit that any diet program that forces you to stop eating the foods you want to eat is ultimately destined to fail. Not only to fail, but to cause you to binge on your favorite foods when the diet crashes and potentially get bigger than you previously were.

The Claim
Food Lovers Fat Loss System says you can stop dieting, stop starving yourself, and continue to eat your favorite foods, but lose weight instead of gain it. They also say this can all happen faster than you think. They say that it only takes 21 days to change your body, and this is interesting because that’s commonly thought of as the amount of time it takes to form a new habit. If you can develop a new eating habit in that time, then it only makes sense that you would continue to do it, since it is ingrained and automatic.

The Hype
The hype comes because like it or not this is going to get grouped together with all of the other diet programs out there, and since it’s in the weight loss industry, there will always be people trying it, saying it’s great, and others saying it didn’t work for them.

The Cost
The Food Lovers Fat Loss System is $140 which includes shipping. They break it up into 6 payments, the first has the shipping charge on it so it’s $40. Then there are 5 more $20 payments after that. They also have an 8 week money back guarantee, which refunds the payments you’ve made, less shipping.

The Commitment
When you compare this to other diet programs, you should have to put less commitment into it, and it should require less will power. Since you are not forcing yourself not to have anything, your brain and body should fight you less about losing the weight. The problem with most diets is that your brain thinks it’s being deprived of something, and basically at our cores we don’t like being deprived of things. It will fight you every day to have what it wants, and eventually it will win, or cause you so much grief that it’s not worth it. By continuing to eat foods that you like, and tasting the tastes you love and have grown accustomed to, this doesn’t put such a large dent in your mind’s view of your self image, and you won’t get as much internal resistance.

Evaluation
The Food Lovers Fat Loss System makes the important distinction that not all calories are created equally. That’s one fatal flaw of many calorie counting systems out there. The calories in a can of cola are not used by the body the same way that the calories in a piece of pizza are. They both contain calories, but how your body processes them is different. We like that you don’t have to count anything, like points or calories. That is such a complicated way to go about losing weight, and puts so much focus on eating and being allowed this or that, or reaching your point limit for the day.

Food Lovers Fat Loss System is getting a Thumbs Up review from us. They do a good job of taking a new approach to the age-old problem of losing weight. By following their tips you should be able to stop making a villain out of the foods that you love, and start making them your ally towards weight loss. If you’ve tried other diet programs, but have never tried anything like this before, you’ve got to give it a go. It could be what you’ve been looking for all this time.

Our Recommendation
We recommend trying this for a few different reasons. First, it flies in the face of almost everything out there by letting you eat the same foods. It’s not an overhaul of what you do, just a shift, and that makes it more effective. Also, it is not heavily focused on exercise, which is actually a good thing. When you try to do everything all at once, both change the way you eat and try to get more active, there is a higher chance of failure. What you eat has a bigger effect on your body than how much you exercise, so get your eating under control with this first, and then start incorporating more fitness into your life.

What do you think? Does Food Lovers Fat Loss System work or not?