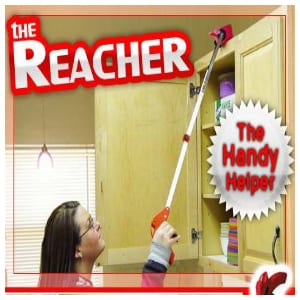 The Reacher is an extension grabber that let’s you get items that are otherwise out of reach or would require a great deal of straining and stretching. There are a bunch of these for you to choose from, each with little tweaks here and there but essentially offering the same benefits. So we looked more closely to see if there is anything that separates this model from its competitors.

Overview
A lot of accidents within the home result from getting off balanced when reaching for something. It puts the body in a position where lots of things can happen, either you’ll topple over, or something might fall on you, or you could pull your back muscles and have back spasm. Staying within your comfort zone is a good idea and that usually means only reaching for things that are above your waist and below your shoulders. A device like this can help you stay within that zone, allowing you to maintain your comfort but still get to the things you need.

The Claim
They say that The Reacher is precise enough to pick up a paper clip, which is fine if you drop a paper clip on the ground. But most users will be trying to get cans of food out of the cupboard, socks from between the washer and dryer, or cups and mugs from the top shelf. They say it is the suction action that gives this its picking up abilities, but this will only be true for items that are able to be suctioned.

The Hype
Products like these are hitting their boom era because of the aging US population. They’re designed to increase independence for people that might be experiencing issues with mobility and frailty. You can expect to see more items like this one as baby boomers age and want to be able to live on their own and not need any help.

The Cost
The Reacher can be found for less than $10, down from its original retail price. The market is pretty much flooded with reaching gadgets like this which has apparently driven the price down. This price is just about right now, because these are good products, but not great, and they don’t deserve an inflated price.

The Commitment
This should make your daily routine easier, as you can use this for a multitude of tasks. But most people will use it if they have trouble bending over to pick things up off the ground, or if they are unable to reach for things above their heads. Once you have one in your home, it’s just a matter of keeping it nearby, or close to the most frequently used areas, such as the kitchen, the laundry room, or a bedroom. It all depends on how you’ll be using it, and for what tasks.

Evaluation
Feedback for The Reacher has been positive, but there isn’t enough hard data as to how well this particular model works. There are plenty of similar products, and the overall consensus is that they work well. It’s simply a matter of trying them out until you find one that performs the way you want it to and stands up to repeated use. You’ll be able to tell right away if it’s well made and what exactly you can pick up with it.

A review on a similar product:

The Reacher is getting our Try rating, as it’s constructed well and performs as expected. It basically has the same design and functionality as other reaching devices, and it could potentially be made in the same factory just branded with a different name. It’s also less expensive than some models, so it could be a deal if you find it for the right price and it works out well for you.

Our Recommendation
These reaching devices are nice to have around the home, but we wouldn’t recommend trying to lift anything very heavy or breakable with them. Even though they claim to be able to lift up heavy items and hold onto them securely, it still relies on your own strength to be able to pick them up, and you could end up dropping the entire unit if trying to lift something too heavy. They’re nice for picking smaller things off the floor so you don’t have to stoop over.

What do you think? Does The Reacher work or not?

← Previous Does Windshield Wonder Really Work?
⚅ back to blog
Next →Does the Homework Caddy Really Work?

2 Customer Reviews on “Does The Reacher Really Work?”