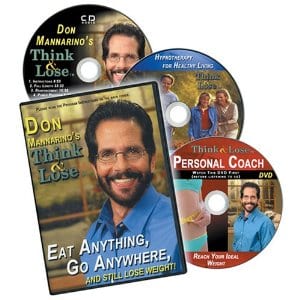 Think and Lose presents a pretty dangerous proposition, but dangerous in a good way. What if you could do away with all of the strenuous exercise and starving yourself of the foods you love, and also not have to use a diet pill or any other sort of supplement or aid? What if you could literally think yourself thin? Sure, we’d all love to do that, and at the root of it all, your mindset plays a big part in how big you are. But can this system get you into that thin mentality, so the pounds just start coming off, almost effortlessly?

Overview
If you’ve ever seen an episode of I Can Make You Thin with Paul McKenna, you’ve seen just how much our emotions and our feelings about food effect the way we eat. You may have also seen that by making small tweaks to the way we think about food, you can potentially correct these problems, lose some bad habits, and begin to eat normally. The same sort of concept is at work here, because the man behind this, Don Mannarino, bills himself as a hypnotist, and says that he can start to break down your cravings for the wrong foods in just minutes a day.

The Claim
The Think and Lose system claims that you can eat the food that you want, and that the system is guaranteed to make you lose weight, just by showing you how to think the right way.

The Hype
Diet programs have enough hype, but when you throw something like hypnosis into the mix, you’re dealing with a lot of extra hoopla. Many people think that diet programs are a big waste of time, and there are even more that think hypnosis is a sham. By putting them together you get a lot of skeptics out there that won’t even try something like this. Then there are others that think it’s the best idea since sliced bread. Of course, the real answer is that it’s somewhere in the middle of these two extremes, so you just have to see which side it’s leaning to more.

The Cost
They’ve got the Think and Lose program on a nothing down free trial. Your credit card isn’t charged at the time you place your order, it is just stored for one month until you decide whether to cancel or not. If you keep it it’s $53 which includes shipping.

The Commitment
Even though this seems pretty effortless, you’ll be surprised how many people receive it and don’t bother opening it. There is something to be said for paying for something upfront, it at least gets you invested in trying it out. Because there is no initial outlay for this product, there is probably a high likelihood that you will lose the motivation to even see what’s on the DVD. If you do manage to play it, you’ll want to invest the time necessary to go through the entire program, and follow along with all of the mental exercises you’re instructed to do. It’s not a passive program that you can just listen to, you’ll still have to be involved and follow directions.

Evaluation
We like that Think and Lose doesn’t follow the conventional way of losing weight, and that it doesn’t require you to do a lot of things that end up being self-defeating later. What’s the point of starting a new diet if you know you’re not going to stick with it? It just makes you less motivated to lose weight. And what’s the point of starting new exercise program if you’re going to give it up at some point? Setting yourself up for failure is no fun, and that’s what you’ll be doing until you fix the problem where it starts, in your brain.

You can force the body and brain to do new things for a brief period, and this is usually called will power. This lasts for a day or two, maybe a few weeks, and some can find it within themselves to push it for a few months. But eventually the dominant image that you hold of yourself in your mind will win out, and you’ll boomerang back to your former self as soon as your will power breaks. But improving the way your mind sees yourself, you should naturally start taking the actions that match that new image.

Think and Lose is based on an interesting premise, and is worth a try. Of course it won’t work for everyone, but for those that are willing to give it a fair trial, there is a chance that it could form lifelong healthy eating habits, and get you to your more natural body weight, without dangerous fad diets, or overexerting yourself in the gym.

Our Recommendation
If you’ve tried a lot of other diet programs with no success, you should try this one, as it takes a different approach, and tries to work right at the source of all of your overeating, your subconscious mind. If you are skeptical about the effectiveness of hypnosis, you should not try this, because you need an open mind to allow it to work. If you go into this with arms crossed and a bent on it not working, it’s not going to work for you, that’s a guarantee.

What do you think? Does Think and Lose work or not?

← Previous Does Brush On Block Really Work?
⚅ back to blog
Next →Does Bellaplex Really Work?

4 Customer Reviews on “Does Think and Lose Really Work?”