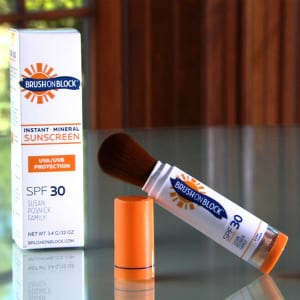 If you don’t like the way conventional sunscreen goes on, you might have been interested when you saw how Brush On Block works. It gets rid of the concept of creams, lotions, and sprays, and allows you to brush sunblock all over your body so that you can an even application without all the mess, fuss, and wasted product. But can it really protect you from the harmful effects of the sun as well as the traditional kinds?

Overview
Getting too much sun can have short term and long term consequences. Sunburn can be very painful, especially if you burn to the point of blistering and peeling. The long term effects can also show up in the form of skin cancer, sunspots, wrinkles, and other damage. By now we’re all familiar with the need to avoid the sun when we can, and block it out when we want to go out and enjoy it. However, we also dread putting on sunscreen and sunblock because it makes a big mess, smells strongly, and if we’re on the beach it can be a magnet for sand. This is an old school problem that is in desperate need of a revamp.

The Claim
Brush On Block says that it doesn’t leave a greasy residue behind, that you can apply it under make up, that it won’t sting your eyes, that it won’t cause break outs, and that you can use it every day. They say it was created by a makeup artist, that is also a skin cancer survivor, and it is made to brush on just like a powder cosmetic. They say that applying it to your kids is fast and easy, and they won’t dread it because it doesn’t sting the eyes. They also say that men can use it just as easily, and even cover parts that they wouldn’t normally be able to with a lotion or a cream, like the bald spot on the top of their head.

The Hype
The hype comes from them using a few scare tactics, bringing up skin cancer a few too many times, and making a villain out of the sun and its rays. Some sun is beneficial, and contains healthy doses of Vitamin D, so you don’t want to avoid it altogether. It’s only when you will be exposed to the sun for a long duration that you’ll want to use a sunblock so you can enjoy yourself without getting burned.

The Cost
It’s $25 for a supply of Brush On Block, which includes shipping. How long it lasts will be up to you and how often you use it. The Catch-22 is that if you like it and it works for you, you’ll end up using it more often, perhaps even daily, causing you to run out of it at a faster rate than that old bottle of sunscreen you have from ages ago.

The Commitment
You’ll have to remember to apply this before going out into the sun for extended periods of time. Some people might just want to incorporate it into their daily getting ready routine, while others would only use it when they are going to spend the day outdoors, go to a sporting event, or take a trip somewhere tropical or along the coast.

Evaluation
Brush On Block is a novel idea, and something had to be done about sunscreen sooner or later. This seems to solve a lot of inherent problems with ordinary sunscreen. A lot of people don’t use regular sunscreen because they don’t like putting it on: it smells, it leaves a greasy feeling on the fingers that you can’t wash off, it takes a long time to apply it, and have it all absorb into the skin, and it can get expensive if you use it a lot. But all of these concerns seem to have been addressed by this product, and they have really reinvented things here.

Our initial concern was that since it is powder based it would clog up the pores, causing problems with allowing the skin to breathe. But if it doesn’t cause breakouts, the minerals must be fine enough so that it is absorbed by the skin and doesn’t cover it up or block the pores and sweat glands.

Brush On Block is getting a solid Try rating from us, because it gets rid of a lot of problems that ordinary sunscreen presents. Most of us know we need some form of every day UV protection, but the thought of using sunscreen every day just doesn’t fly. But with this, it’s feasible that you would actually use it regularly, and even enjoy putting it on, which would be a definite break from the norm.

Our Recommendation
It’s nice when they totally erase the drawing board and start from scratch on a new answer to an old problem. That’s what they’ve done here, and it’s definitely worth a trial to see how you like it. It’s about the price of two bottles of ordinary sunscreen, so you’ll have to see if it lasts as long as two bottles does. But this might not be a fair comparison, because if it works you’ll use it more often and run out of it more often. That’s just the price of being sun healthy, and avoiding all of the negative effects that come with too much sun.

What do you think? Does Brush on Block work or not?

← Previous Is iPage Really a Good Hosting Company?
⚅ back to blog
Next →Does Think and Lose Really Work?

20 Customer Reviews on “Does Brush On Block Really Work?”